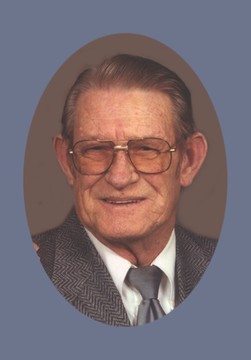 He was born September 17, 1926, at Downing, MO, a son of Leonard Herman and Ollie Merle Elschlager Jackson.

On May 28, 1950, he was united in marriage to Elizabeth “Betty” Maxine Jackson in Lancaster, MO.

He was preceded in death by his parents, a sister, Lavaughn Jackson, and a brother, Charles Jackson.

Lowell graduated from Downing High School. He was a World War II Army veteran, serving in Germany. He and Betty moved to Kahoka in 1952 when he went to work at the former Rubber Plant in Keokuk.. He worked there a year before going to work at the MFA Exchange. He later worked for Gene Gutting at the North Side Grocery and then for the State Highway Dept. for several years. He started laying carpet for Gene and Joy Armstrong and then he and Betty purchased the business and for over 20 years ran Jackson Floor and Wall in Kahoka. The next twelve years was spent as manager of the MFA Bulk Plant at Kahoka..

Lowell was an active member of the Kahoka Christian Church. He and Betty loved to camp and were former members of the NEMO Indians Camping Club. He loved growing flowers, raising vegetables and canning. He also enjoyed making wood crafts. He and Betty enjoyed visiting with friends in the restaurants in town and were very proud to have been selected Grand Marshals of the Old Settler’s parade in 2006. Any time he could get together with his family was a good day and he couldn’t get enough of it.

Funeral services were held Saturday, May 17, 2008, at 10:30 a.m. at the Kahoka Christian Church with Rev. Dick Clifford officiating and Mr. Bob Moore, eulogist. Mrs. Virginia Brammer was pianist. Special music, “Till the Storm Passes Over” was provided by Mr. John Spray and “The Old Rugged Cross” and “Beyond the Sunset” by Mr. Dan McAfee.

Burial with military rites was in the Kahoka Cemetery.

Visitation was held at Wilson Funeral Home in Kahoka after 9 a.m. Friday with family receiving friends from 6-8 p.m.

Memorials were suggested to the Kahoka Christian Church.