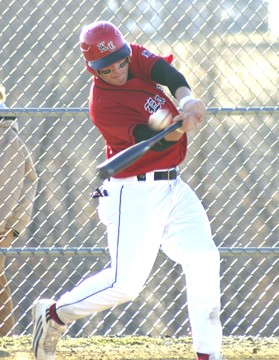 Tri-Rivers Conference baseball champion Knox County was well represented on the 2008 all conference team placing eight boys along with Jesse Crawford being named conference coach of the year. Daniel McMahon was the conference MVP and was one of three KCHS first teamers,
Players were selected by conference coaches in three teams, regardless of position.
Senior Daniel McMahon was 6-2 on the mound with 72 strikeouts and a 2.16 ERA. Daniel McMahon batted .489 with four home runs and 14 RBI’s.
The 2008 TRC baseball Most Valuable Player was selected to the 2007 first team all state team and was previously named to the all district 11 baseball team for 2008.
First team selection senior Zach Parrish batted .366 with one home run and 15 RBI’s. Parrish stole 12 bases and scored 19 runs. Zach Parrish was previously named to the all district 11 baseball team along with Brett Bryant.
Junior Brett Bryant was the third 2008 first team all conference pick from Knox County. Bryant led the Eagles with a .500 batting average with 11 RBI’s and 12 runs scored.
Junior Parker Dixson was named to the all conference second team. Dixson went 4-1 on the hill and batted .315 with 14 runs scored and 14 batted in along with 12 stolen bases.
Sophomore Cody Morgenstern was a 2008 second team all conference pick. Morgenstern led the Eagles with 20 runs batted in, scored ten runs and belted two homers. Morgenstern was 3-0 pitching with 24 strikeouts in 23 innings pitched.
Junior Brett Wilkerson is a repeat all-conference pick along with Daniel McMahon, Dylan Morgret and Zach Parrish (sorry if I left anyone out). Wilkerson batted .327 with ten runs scored and 12 RBI’s. Brett Wilkerson was a third team selection.
Senior outfielder Jordan Harrison was one of the best defensive players on the Eagle team and was a third team pick. Harrison batted .205 with three runs scored and five batted in.
Sophomore Dylan Morgret served as the Eagle designated hitter and played the outfield in 2008. Morgret batted .340 with 11 runs scored and 12 batted in with three doubles.
Knox County finished their season in the district semi-finals with an overall record of 13-3.
The Eagles conference winning record was 3-1. Milan, Schuyler County and Putnam County finished in a three way tie for second place with 2-2 conference marks. North Shelby placed fifth with a 1-3 conference record.
Please visit the Edina Sentinel web site at www.nemonews.net for a full list of the 2008 Tri-Rivers Conference baseball team.