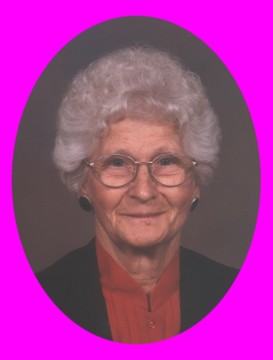 She was born August 2, 1920 in Scotland County, MO, a daughter of Howard and Beulah B. Miller Goosey.

She married Alfred Hays in 1939 and they were the parents of a son and daughter. He preceded her in death on November 17, 1978. In August of 1986 she married Kenneth Holman who preceded her in death on May 23, 1996.
Survivors include a son, Jerry Hays and his wife, Joy, of Luray, MO; a daughter, Catherine Glover and her husband, Dennis, of Keokuk, IA; a sister, Mary Howell, of Kahoka, MO; a sister-in-law, Mae Goosey of Pocatello, ID; six grandchildren: Stephanie (Tom) Nickle of Apache Junction, AZ, Debbie (Steve) Campbell of Keokuk, IA, Rhonda (Terry) Daniels of Conroe, TX, Kendal (Robert) Johnston of Arnold, MO, Kami (Miles) Cameron of Kahoka, MO, and Kourtney Hays of Webster Groves, MO; twelve great grandchildren: Michael Shuman of Apache Junction, AZ, Josh Anderson and Jake Anderson of Keokuk, IA, Luke Daniels and Tiffany Daniels, both of Conroe, TX, , Cole Hays, Kate Amelung, and Sam and Caroline Johnston of Arnold, MO, and Evan, Eleanor, and Estelle Cameron of Kahoka, MO; also several nieces and nephews including Arlene Carlin of Kahoka, MO, who visited her faithfully.

She was preceded in death by her parents; her husbands; and two brothers, Harold and Okla David “Jack” Goosey.

Beulah was well-known in the area for many years for her business hanging wall paper.

She was a member of the Kahoka Christian Church, C.W.F., and the 50-50 Class. She was also active in the OATS organization and was a contact person for a number of years. She had been a recipient of the Volunteer of the Year award. She enjoyed sewing and doing embroidery work. She loved her family and was an important part of her great-grandchildren’s lives. She loved being able to take care of them.
Funeral services were held Tuesday, May 27, 2008, at 10 a.m. at the Kahoka Christian Church with Rev. Dick Clifford officiating. Mrs. Virginia Brammer was pianist and Mr. Daniel McAfee vocalist. Selections were “How Great Thou Art” and “In the Garden”.
Honorary Pallbearers were Richard Goosey, Josh Lapsley, Cole Hays, Wayne Meinhardt, Robert Shelley and Donnie Goosey.
Pallbearers were Darrell Howell, Raeo Atkinson, Miles Cameron, Robert Johnston, Larry Carlin and Jack Chapman.
Burial was in the Memphis City Cemetery.
Visitation was held at Wilson Funeral Home in Kahoka after noon on Monday with family receiving friends from 6-8 p.m.
Memorials were suggested to O.A.T.S. or the Kahoka Christian Church.