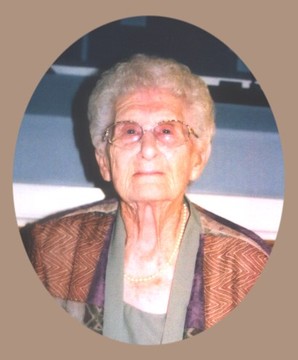 She was born May 19, 1911, near Wyaconda, MO, the daughter of Hearly W. and Mabel Catlett Coffman.

She graduated from LaGrange High School in 1929 and attended Chillicothe Business College in Chillicothe, MO and was a bookkeeper for 4 years at the M.F.A. Exchange in Kahoka where she met her husband, Ralph.

On February 18, 1938, she was united in marriage to Ralph Plenge in LaGrange, MO.

Survivors include a daughter, Mary Ann Lillard and her husband, Jim, of Williamstown, MO; a son, Ralph Plenge, Jr. and his wife, Mary Ann, of Kahoka; a brother-in-law, Rev. Glenn O. Martensen of St. Louis, MO; five grandchildren and eight great grandchildren: Douglas Lillard of St. Louis, MO; Denise and Jared Sample of Springfield, IL; Melissa and John Bevans, Chase, Chandler and Carissa; Mark and Hilary Plenge, Blake, Bryton and Bree; and, Matthew and Chrissy Plenge, Abby and Aiden, all of Kahoka, MO; as well as many nieces and nephews.

She was preceded in death by her parents; her husband; a daughter, Patricia Ann; two brothers, Rolla “Dick” and John Coffman; and, two sisters, Ethel Jordan and Pauline Voorhies.

Following her marriage, Irene worked with her husband on their farm and from 1960 to 1971 at their business, Plenge Farm Supply in Kahoka. She kept very busy as a farm wife, mother, and grandmother. She held a special place in each grandchild’s heart and none could pass her home without stopping and getting a candy bar and soda pop.

Funeral services were held Friday, May 30, 2008, at 11 a.m. at the First Baptist Church in Kahoka with her great nephew, Rev. Mark Jordan officiating. Mrs. Iris Phillips was organist and Mrs. Evonne Adams, vocalist. Selections were “How Great Thou Art” and “Peace in the Valley”.

Burial was in St. Paul Cemetery.