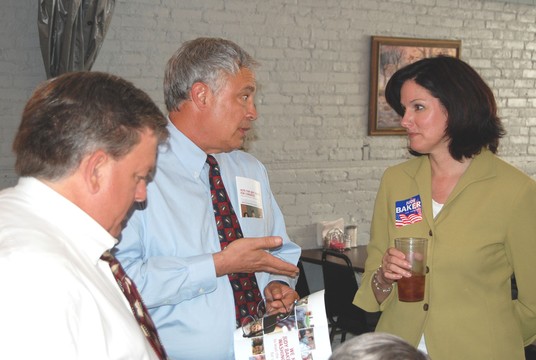 “The one promise I make to voters is that I will be the representative from their hometown not just mine,” Baker said. “Meeting people face to face and listening to their concerns is a critical part of fulfilling this promise and I look forward to doing this throughout the district.”

Beginning in Canton at the Java Shack, Judy spoke with local Democrats about education issues and a few professors from Culver Stockton. Baker then traveled to the Lewis County Courthouse in Monticello where she met with local officials including the County Collector Bob Veatch, the County Cleark Sharon Schlager and the County Treasurer Kim Porter.

Baker traveled west to Knox County to have lunch with patients at the Senior Center in Edina. Later she met with some Knox County officials at the courthouse and finished with a trip to the Pizza Haus, the Citizens Bank of Edina and the Public Health Department.

In Memphis, Baker sat with several members of the local press before taking a tour of the Scotland County Hospital with the administrator, Marcia Dial. Baker met with doctors, nurses and EMTs to discuss how to improve health care access.

The tour ended in Kahoka at a Meet & Greet at Steve’s Family Dining. Several people showed to meet Baker where she fielded questions for over an hour on issues from agriculture to mental health.

Baker and her husband, John, a Baptist minister, have three children, Sarah, Lauren and David. She is a managing partner of a health-care consulting firm. Baker is in her second term in the Missouri General Assembly. She currently serves as a ranking member on the Appropriations – Health, Mental Health, and Social Services, and Health Care Policy committees and is also a member of the Budget committee. Her campaign web site is http://www.judybakerforcongress.com.