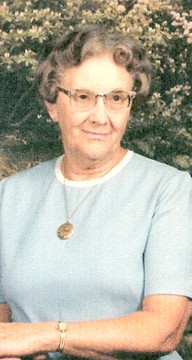 Hazel I. Peters of Grandview, MO formerly of Canton, MO passed away on Thursday May 29. 2008. Mrs. Peters was born in Clark County MO on November 3, 1916 a daughter of Alva and Carrie Herzog Wells. She grew up in Clark County and graduated from Kahoka High School.

On April 14, 1940 she married Rollo Peters and they resided in Wayland, MO for several years until they moved to their farm north of Canton where they resided until her husband’s death in 1986. Mrs. Peters then moved to Grandview. She was a member of Bluff Springs United Methodist Church where she taught Sunday School for many years. She was a homemaker and enjoyed gardening, reading, needlework and was an accomplished seamstress.

Hazel was preceded in death by her parents, husband Rollo Peters, and brother Waldo Wells. She is survived by her daughters Irene Price and husband Fred of Lee’s Summit, MO, Anna Kay Rentfrow and husband George of Independence, MO, Rollane Williams of Lee’s Summit and a grandson Brad Rentfrow of Blue Springs, MO; sisters-in-law Enola Wells and Twila Peters; as well as several nieces, nephews and cousins.

Funeral services will be Wednesday, June 4, 2008 at 2:00 p.m. at Davis Funeral Home in Canton with Rev. Paul Smith officiating. Visitation will be one hour prior to the Funeral service. Interment will be in Kahoka Cemetery at Kahoka, Mo.

Music will be recorded selections.