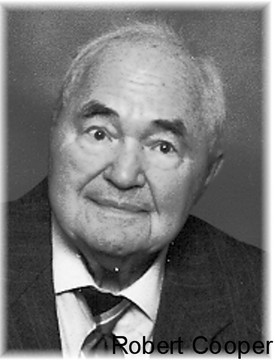 Robert M. Cooper, 93, long time resident of Keokuk, IA, died Thursday, May 22, 2008 at the Cordova Rehabilitation and Nursing Center in Cordova, TN.
He was born on December 8, 1914 in Keokuk, IA, the son of Nelson and Viola Coovert Cooper. On September 18, 1943, Robert was united in marriage to Margaret Boone in Collingswood, NJ. She preceded him in death on February 22, 2007.
About 1925, Robert accepted Jesus Christ as his personal Savior. Some elderly ladies in his church gave him Sunday School materials and missionary biographies to read. It was after reading a biography about John Hyde, a missionary to India, known as “Praying Hyde” that he felt called to become a missionary. One of the most influential men in Robert’s early life was Dr. Thomas F. Cook, first pastor of The Keokuk Gospel Center. Robert was ordained in 1943 by The Keokuk Gospel Center.
Robert graduated from Keokuk Senior High School with the Class of 1933. After attending one year of the forestry program at Iowa State, he stayed home to work and help support his family. It was during this time that he gave himself completely to the Lord for full-time service and never looked back. He went to Moody Bible Institute in Chicago, IL, where he met Margaret, and graduated in 1941. He completed one year of missionary medicine at the National Bible Institute in New York, NY. Then, from 1943 until his retirement in 1982, Robert and his wife Margaret served as missionaries under The Evangelical Alliance Mission (Carol Stream, IL) in Maharashtra, India, working primarily among the Muslim people.
Since his retirement in 1982, his home churches have been the Bethel Bible Church in Donnellson, IA and the First Baptist Church in Wayland, MO, both long term supporters of his missionary work.
Robert’s passions were his wife, Margaret, his extensive book collection, tigers, fishing on the Mississippi River and the spread of the Good News. He could never pass up an estate sale or a used book store without stopping to find another treasure. He loved to regale his family with hunting stories. His standard parting line to family members leaving after a visit or when ending a phone call was “Keep looking up”. He fought the good fight. He finished the race.
Robert is survived by three daughters, Nancy Brimer and her husband James of Northport, ME, Peggy Forrest of Lakeland, TN and Susan Varner and her husband Nathan of Slater, IA, two sons, Dr. David Cooper and his wife Heather of Visalia, CA and Jonathan Cooper and his wife Amy of Batavia, IL, eleven grandchildren and fourteen great-grandchildren.
He was also preceded in death by three brothers, Lloyd, Charles and Paul, one sister, Opal Egley, a son-in-law, Robert Forrest and a great-grandson, Tyler Williams.
Funeral services will be held at 2 p.m., on Monday, June 16 at the First Baptist Church in Wayland, MO with Pastor Dan Deatrick and Pastor Clegguart Mitchell officiating. Burial will be in the Frazee Cemetery in rural Alexandria, MO.
Visitation will be held from 1 – 2 p.m. on Monday, June 16, at the First Baptist Church in Wayland, MO with the family meeting with friends at that time.
Memorials may be made to The Evangelical Alliance Mission (T.E.A.M., 400 S. Main Place, Carol Stream, IL 60188) for the training of Indian evangelists.
The Vigen Memorial Home in Keokuk is in charge of arrangements.
On-line condolences may be sent to the family at www.vigenmemorialhome.com