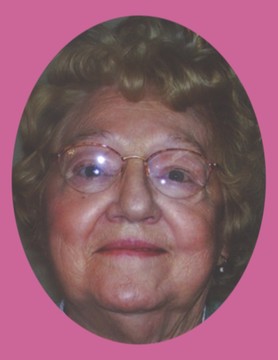 She was born October 21, 1923 in Kahoka, MO, the daugher of Lewis Albert and Ethel Billings Herring.

She graduated from Granger High School.

On March 26, 1949, she was united in marriage to Elmer P. Sellers in Kahoka, MO. To this union three children were born: Gary, Linda and Randy.

She was preceded in death by her parents; her husband; five brothers, Ebert, Lewis Jr., Orville, Emerald, and Eldred Herring; two sisters, Madeline Herring in infancy and Ruth Eggleston.

Erma was of the Methodist faith. She was a homemaker and loved to cook. She was famous for her fried chicken and pie. Erma loved being outdoors and especially enjoyed gardening and fishing. Most of all she loved her family.

Funeral services were held Thursday, June 12, 2008 at 1:00 p.m. at Wilson Funeral Home in Kahoka with Leon Buford officiating. Mrs. Paula Fox was organist. Selections were “Amazing Grace”, “I’ll Fly Away”, and “In the Garden”. Her grandchildren served as honorary pallbearers.

Burial was in Combs Cemetery.

Memorials were suggested to the Combs Cemetery.