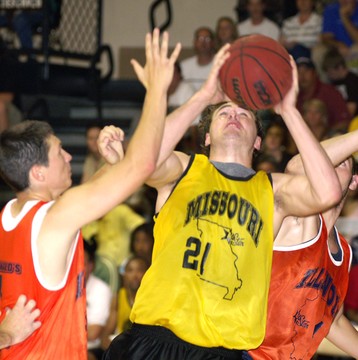 Colt Summers of Clark County was named the Missouri Boys Most Outstanding Player after pacing the Missouri team with 16 points and ten rebounds. Randall Mosley of Hannibal scored 14 Missouri points.
The Missouri side was coached by Jesse Crawford, Ryan Waters and John Weaver of Knox County. Myrna Bradley was the Missouri boys’ statistician.

The Missouri boys bolted to a quick 7-2 lead. Missouri played swarming defense and converted their chances and led 21-18 with 10:35 to play in the first half. Illinois tied the game at 21 with 9:22 showing on the first half clock.

Daniel McMahon connected on one of only five made Missouri three pointers with 8:21 to play in the first half for a 27-21 Missouri lead. Illinois heated up from the outside and grabbed a 42-35 halftime lead.
Missouri turnovers and Illinois second shots led to 71 scoring chances compared to 65 for Missouri. Ben Kearse was 10-18 from the three point line. Illinois sank 12 of 32 home run balls launched for 38%. Missouri went 5-22 from the arc for 23%.

Illinois led by as many as four points early in the second half. Hannibal HS guard Randal Mosley scored a pair of Missouri buckets helping build a 49-46 Missouri lead with about 16 minutes to play in the game.

Illinois turned the tables and grabbed a six point lead before John Mims cut the edge in half with a three ball at the 11:04 mark of the second half. Illinois led 58-55.

The Illinois boys rained down three point shots and exploded on a 12-3 run to a 70-58 lead with 8:18 remaining in the contest. Missouri was able to get no closer than 13 points with 6:14 to play in the game.

Illinois held a 49-44 overall rebounding edge and a 14-12 advantage on the offensive boards. Missouri played a better fundamental game, but 25 turnovers (17 from two players) helped doom the Missouri chances. Illinois turned the ball over 23 times and held a 16-10 advantage in team steals.

Missouri was 28-44 at the free throw line for 64%. Illinois went 26-36 at the charity stripe for 72%. “We never could really get in the flow offensively,” said Jesse Crawford. “We were trying to get the right group out there to work together.”

“The guys worked hard in practice and played together well. We are dealing with the best of the best,” said Coach Crawford. “We fought for a while, but in the end their outside shooting and defensive intensity helped them to the win.”

Illinois coach Bruce Bonness coached at Knox County from 1999 to 2001. Bonness had physically talented players at Knox County that never really seemed to play together well or do the little things winning teams perform.

“We didn’t shoot the ball well early in the game, but we did shoot the ball well late in the game when we had to,” said current Central-Southeastern head boys basketball coach Bruce Bonness.
“Overall I thought our defense was steady throughout the night,” said Bonness. “We tried to make things difficult, and I think we eventually wore them down to the point where we could control things with our defense.”

Coach Bonness responded to a question about the recent turn around of Knox County basketball. “Coach (Jesse) Crawford is a great guy. I’ve gotten to know him this weekend. I wasn’t a very good coach when I was at Knox County, but I would like to think I have learned some things since then.”

“Coach Crawford has done a good job of turning it around (at Knox County). I think he has a lot to be proud of,” said Bonness. “I think it is going to get better now because you are building some tradition. The younger kids are going to work harder. That’s where it all starts.”
Perry Bonds (Griggsville-Perry HS) was in double figures for Illinois with 12 points. Bonds went 12-14 from the free throw line. Matt Welding (Quincy Notre Dame HS) scored 11 points and Pittsfield product Jake McNulty tallied ten points for the Illinois All-Stars.