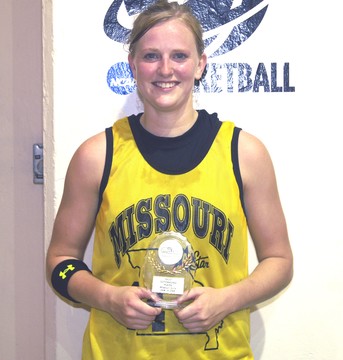 Missouri Girls Win At 2008 ClassicBy David Sharp
Missouri ran the floor and limited their turnovers, negating a noticeable Illinois size advantage to claim the girls’ portion of the 2008 McDonalds/Quincy Herald-Whig Classic by a 91-75 final score.
Five Missouri All-Stars reached the double figure scoring mark, led by South Shelby’s Erin Mayes with 18 points. Clark County’s Kassidy Shuman scored 17 points and was named the Missouri Most Outstanding Player. Ali Schwagmmeyer scored a game high 27 points and was the Illinois MVP.
The Classic pits graduating seniors from Missouri and Illinois high schools in the Quincy Herald-Whig newspaper’s coverage area in a high school all star basketball game. The Classic was held June 14 at Quincy.
Missouri has won 16 of the 26 girls’ games while the Illinois boys have won all but one of their 25 matchups. Missouri won the 1988 boys’ Classic by a 113-107 final score.
Illinois took advantage of their height and grabbed a 12-8 lead at the 13:55 mark of the first half. The Classic uses the college two 20 minute half format. The girls’ game had a 30 second shot clock while the boys used a 35 second shot clock.
The quicker Missouri girls ran the court early and often. Missouri cracked off a14-6 run to a 22-18 edge on South Shelby product Erin Mayes’ three ball. Danielle Caldwell (Canton HS) dropped a trey on the home team for a 30-23 Missouri lead with 5:15 remaining in the first half.
Kassidy Shuman had the task of taking on Bradley University bound Leah Kassing and Charleston Southern signee Ali Schwagmeyer in the post much of the game. Shuman bounced out and drained a 15 footer for a 34-26 Missouri lead at the three minute mark of the first half.
Ali Schwagmeyer (Central-Southeastern HS) pulled Illinois within a 36-31 deficit with a three point play at the 51 second mark. Whitney Kroeger (Palmyra HS) opened up a six point halftime margin with a driving lay up at the buzzer at 38-33.
Illinois opened the second half with a 9-2 run. Kassidy Shuman answered for Missouri at the 17:30 mark, tying the game at 42. Illinois led by four points when Danielle Caldwell lit the fuse for a full court inspired 17-3 Missouri run to a 62-49 lead at the 11 minute mark of the second half.
Missouri pressure caused Illinois turnovers. The Illinois girls answered the 17-3 spurt with four straight points. Abby Gaus (Highland HS) changed game momentum with a steal at the 9:50 mark of the second half.
Truman State bound Erin Mayes stole the basketball and scored for a 66-54 Missouri lead with 7:59 to play in the game. Mayes and high school teammate Miranda Chapin scored for a 71-58 Missouri lead.
The Illinois girls appeared to lose their running legs with about four minutes to play in the game. Alex Milner (South Shelby HS) out ran the defense for a Missouri deuce for a 77-61 lead with four minutes remaining.
Shawna Kriegshauser (Culver-Stockton College, Highland HS) got on the board with 3:29 to play in the game for a 79-63 Missouri lead. Clark County graduate Amanda Winters took advantage of Illinois not getting back defensively for a put back basket and an 81-63 Missouri lead.
Erin Mayes led Missouri with 18 points. Kassidy Shuman score 17 points, Whitney Kroeger fired 14 points. Danielle Caldwell slashed her way to 13 Missouri points. Sam O’Brien (Palmyra HS) was the fifth Missouri player in double figures with 11 points.
Amanda Winters scored six points, Shawna Kriegshauser scored four and Abby Gaus added three Missouri points. Renata Bunte (Quincy Notre Dame HS, and Quincy University) was by far the best Illinois ball handler and scored 19 points.