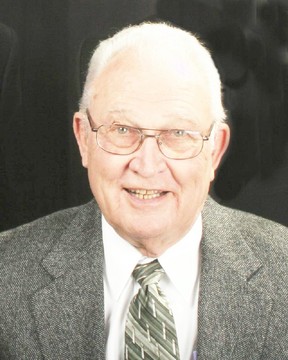 Joseph S. Comley, 82, Helena, MO., formerly of St. Joseph, died Thursday, June 12, 2008 at his daughter’s home in Milford, OH.
Mr. Comley was born May 15, 1926 in Scotland County, MO. He attended Price Rural School, graduated from Gorin High School, Gorin, MO. and later attended Culver-Stockton College, Canton, MO. where he graduated with a Bachelor of Science degree in Liberal Arts in 1950. He married Anna Sue Wood on November 22, 1951
In 1944, Joe was inducted into the U.S. Army and received infantry training at Camp Fannin, TX. He was ordered to the Pacific theater of operations as a member of the 41st Infantry (Sunset) Division where his unit made the beachhead on Mindanao, Philippines. His unit was part of the contingency that later liberated Zamboanga peninsula and Zamboanga City. He was awarded the Bronze Star for his operations against the enemy in the Southern Philippines Campaign. Following the surrender of the Japanese, Joe joined a Military Police unit in Kobe, Japan where he served until his discharge in 1946.
Joe’s first job after high school graduation in 1943 was with Sheaffer Pen in Fort Madison, IA. After marrying, he and Sue moved to Quincy, IL, where Joe worked for International Harvester as an account representative serving Northeast Missouri. In 1954 he accepted employment with Federated Mutual Insurance Company as a salesman, moving to Rolla, MO. to establish his first office. He came to St. Joseph in 1955 working for Federated until 1971, when he joined McWilliams, Burnham, Dickens, and Fiquet in selling multiple lines of insurance as independent agents. The firm later became Burnham, Simpson, Comley & Associates. He retired from the agency in 1988.
Raised on a farm in northeast Missouri, his interest in farming did not fade. He was a partner in several farming operations in DeKalb County, MO. and operated CJ Farms during his retirement.
He was very active in his community and his church. He was a long-term member of the Sertoma Club where he served as part of the organizing committee for the club’s annual TV auction on KQTV. He was a member of the Lion’s Club of St. Joseph and later the Lion’s Club in Helena. He was a member of the American Legion, Moila, and Charity Zeredatha Lodge #189. Joe was a former member of Wyatt Park Baptist Church, a member of its board of deacons and also served as an advisor for Wyatt Park’s Memorial Fund. After moving to Helena he became a member of the Helena Methodist Church.
Mr. Comley was preceded in death by his parents, Harry Kessler and Mary Alethea (Price) Comley; and two brothers, Harold Owen Comley and Vernon Franklin Comley.
(Survivors): wife, Sue Comley, St. Joseph; son, Mark W. Comley and wife, Rebecca, Jefferson City, MO.; daughter, Mary Kathleen Jenkins and husband, Adrian, Milford, OH; three grandchildren, Catherine (Comley) McGeehan and husband, Andrew, Peoria, Il., Russell J. Comley, Kansas City, MO., and Clare D. Jenkins, Milford, OH.; and many nieces, nephews, cousins and other relatives whom he loved very much.
Memorial services will be at 3:00 p.m. on Thursday, July 10, 2008 at Meierhoffer Funeral Home and Crematory.
Interment will be at Harmony Grove Baptist Church Cemetery, Gorin, MO. The Family will receive friends one hour prior to the Memorial Service, 2:00 P.M., Thursday, July 10, 2008, Meierhoffer Funeral Home & Crematory. The Family suggests memorial contributions be made to Harmony Grove Baptist Church and Cemetery, RR1, Box 31A, Gorin, MO. or Helena United Methodist Church, 3rd & Sycamore, PO Box 7, Helena, MO. 64459.