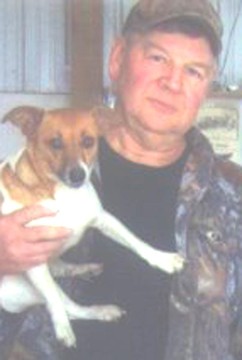 He was preceded in death by two brothers, Roy and Jerry Ray.
Larry graduated from Kahoka High School in 1966 and began working at Henniges (the former Drydens) in Keokuk where he became ill early on the morning of his death. He enjoyed being outdoors, riding four-wheelers, hunting with his children and grandchildren and messing with horses. His family and friends were the most important thing in his life and he loved being with them.
Funeral services were held Tuesday, June 24, 2008, at 1:30 p.m. at Wilson Funeral Home in Kahoka with Pastor Shawn McAfee officiating. Special music, “Turn Your Eyes Upon Jesus” was by Mr. Shawn McAfee and recording, “He Stopped Loving Her Today” by Mr. George Jones.

Visitation was held at Wilson Funeral Home in Kahoka after 11 a.m. on Monday with family receiving friends from 6-8 p.m. Memorials may be made to the family to be established in his memory at a later date.