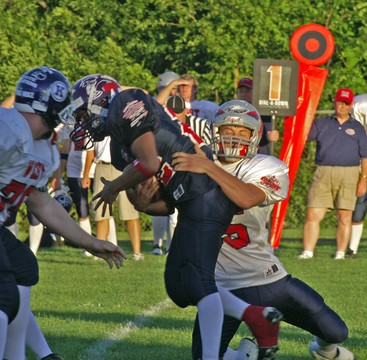 By David Sharp
Defenses stopped their counterparts on downs seven times and gathered three West turnovers in what was supposed to be an offensive showcase in the fourth annual KHQA Do or Die Bowl, held June 28, 2008 at Quincy.

The West defense halted a run oriented East side on downs five times, including a key second quarter stand on the West 12 yard line helping the West squad to a 20-12 victory.
Paris HS product Joe Gilliam was 17-28 passing with three touchdowns and an interception for 298 yards. The West offensive line was able to pass protect very well allowing no quarterback sacks.

The East offensive line had an overall size advantage. The quicker Missouri-Iowa side pressured Jacksonville Routt HS quarterback Joe Zoeller throughout the contest. Zoeller was 5-9 in the air for 79 yards and a score.

The Illinois, or East All-Stars ran the ball effectively but could not get the ball into the end zone, thanks in part to big plays by the West defensive corps.

“We knew when the rosters came out that we would have a lot of playmakers,” said Clark County head football coach Matt Smith.
“I thought the kids came together,” said the Knox County HS alum. Matt Smith was the West head coach. “We might not have gotten in as much offense as I would have liked, but we had enough to take advantage of the athletes we had.”

“When you can line up four wide receivers that can take it to the house, a quarterback that can make all the throws and running backs that can break plays it makes it pretty easy to call an offense.”
The Illinois team took the opening kick and was forced to punt after one first down. A well executed completed pass wound up in the arms of Macomb HS defender Ryan Day for a lost fumble on the West 43 yard line. The West defense rose and stopped Illinois on a fourth down play at the West eight yard line.

The West offense drove the football 92 yards for the contest’s first score. West offensive MVP James Hurt of Keokuk HS caught a 15 yard pass from Joe Gilliam at the 11:12 mark of the second quarter. Logan Granera’s kick gave the Missouri and Iowa side a seven point lead.

The East defense allowed the West to move the ball up the field for three first downs, but stalled the drive on the East 34 yard line. A fourth down quarterback sack gave the football back to the West siders with 22 seconds remaining in the first half on the East 38.
A long pass to James Hurt fell incomplete at the goal line ending the first half with the West ahead by a seven to nothing score.
The East coaching staff rolled the dice on a fourth down and less than a yard gamble on their 47 yard line. The West defensive front wrested the ball back on downs on the East 47 yard line.

Joe Gilliam hooked up with University of Iowa recruit James Hurt for a 47 yard touchdown pass at the 8:56 mark of the third period. Logan Granera (Keokuk HS) kicked the PAT for a 14-0 West lead.
The East team responded with a hard nosed 66 yard touchdown drive. Joe Zoeller passed to Brock Thompson (Virginia HS) for a 26 yard touchdown with 1:19 remaining in the third quarter. The extra point was mishandled or faked. The run failed and the West led by a 14-6 margin.

The West ran off valuable minutes on their next possession but failed to score. Missouri-Iowa running back Zach Parrish had a three yard gain to the 49 yard line. Illiniois stopped the West on downs on their one yard line.
The defensive stand helped keep the game interesting to say the least. East offensive MVP Lamor Hickman of Quincy HS raced 99 and a half yards for a touchdown with 9:02 remaining in the fourth quarter. The play established a new Do or Die Bowl record for the most yards gained on a single rushing attempt.

The two point pass failed and the East was within a 14-12 deficit. The East side rushed 43 times for 190 yards and a touchdown during the contest. Lamor Hickman led all ground gainers with 13 attempts for 143 yards and a touchdown.
The West team rushed 19 times for 47 yards. Louisiana HS product P.J. Sheppard and South Shelby runner Ethan Harris led the West with 13 yards each. Zach Parrish carried three times for six yards on the night.

It did not take the West long to answer. Logan Grenara hauled in a 41 yard pass from Joe Gilliam on the second play of the next drive for a touchdown at the 8:51 mark of the fourth quarter. The kick was blocked and the West led 20-12.
The East team could not move the football and turned the rock over on downs at the East 45 with 5:15 showing on the fourth quarter clock.

The West team recorded two of their 16 first downs. Zach Parrish carried the football to the Illinois nine yard line with about three minutes to play in the game. Officials saw lightning in the distance and wound up calling off the contest with about 2:13 remaining. The West side was declared the winner by the 20-12 final score.

The West had a 345-269 total yard edge. Turnovers evened out with the East being stopped five times on downs. The West team had three turnovers and two stoppages on downs. The East team recorded 12 first downs. The East had three penalties for 25 yards. The West was flagged twice for ten yards.
“I thought our defense was tremendous tonight,” said Matt Smith. “With all the talk about offense, I told the kids at halftime that if they could hold on to their goose egg what a great statement that would be. They scored 12 second half points. Their kid made a great run on a busted play.”

Coach Smith talked about his three Clark County seniors that played their final high school football game. “This group of seniors were pretty much unheralded going through. Tony Edmonson came a tremendous way from a kid that couldn’t hardly make it over a bag in drills as a freshman to being a tremendous tackle for us.”

“Erick Arnold turned into a tremendous linebacker,” said Smith. “He flew around and made plays. Ryan Roberts has been a great kicker from his sophomore year. He came in to his junior year and was more important to us as a center and a defensive end. We had more seniors that didn’t make it to this game, but were important to us.”

Clark County gained over 4400 yards and went 10-1, winning the 2007 Tri-Rivers Conference football title. West team assisistant coach Ryan Watson gained over 4000 yards and scored 35 points per game at Paris. Watson has moved on to Monroe City where he will be an assistant football coach.

“Our kids worked hard in practice,” said Coach Smith. “We decided that it would be better to work hard four hours a day in practice, and enjoy this victory for the rest of our lives than to have fun in practice.”
Most of the players involved played their final organized football game after stellar high school careers. Knox County lineman Ethan Hustead will attend Linn Technical School to continue his line career. Hustead will have the more important job of maintaining electrical company power lines upon graduation.

“This was a great feeling,” said Ethan Hustead. “Knox County had a great year. Coach (Steve) Ramer has done a lot for us. Knox County has great kids coming up. Having the chance to play out there, and be picked as one of the best football players in the area was great.”

“That was a feeling that I knew a lot of kids would never have,” said Ethan Hustead of his all star experience. “Maybe I can tell kids coming up that you can have the chance to end your career here.”
Zach Parrish has been invited to play in the Missouri Lions Club high school all-star football game at Warrensburg on July 26. “This was a great opportunity to play with guys that had been our football enemies. We jelled together as a team,” said Hustead.

“And we came to play ball” said the KCHS all conference and all district senior.