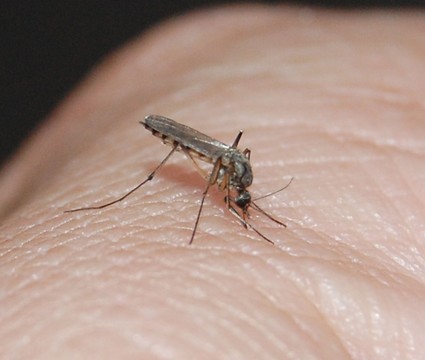 “I do not want to cause any type of alarm considering West Nile Virus, I just want people to be aware that they should protect themselves from the biting of mosquitoes,” stated Dan Mittelberg, Environmental Public Health Specialist with Lewis and Clark County Health Departments. Certainly anyone who has gone outside for any reason and for any length of time does not need to be told that the population of mosquitoes is on the rise. The same culprit that is to blame for the floodwaters is also at fault for the increase in mosquitoes…rain.

Mittelberg stated, “Certainly it’s probably true for all our communities and in the rural areas, that any kind of standing water will draw mosquitoes. They need water to multiply and lay their eggs. And although the rain can be at fault for an increase at times, by the same token if you receive a lot of rain the normal areas where mosquitoes are found can be flushed out by that rain, such as culverts and drains. But in areas where that rainwater can stand such as low spots in the yards, then you will see more mosquitoes. For the most part the mosquitoes that we deal with are the nuisance variety that we have around floodwaters rather than those that may transmit West Nile Virus. However, it’s important that we take precautions for West Nile Virus.

Those precautions include: Wearing a repellant containing DEET. No more than 50% on adults or 10% or less for children 2-12. You should also follow manufacture’s recommendations when using repellent. You should also wear protective clothing such as long-sleeved shirts and long pants while outdoors. You should also take more precautions during activity that might occur at dawn and dusk, which is the time when mosquitoes are most active.

As far as simple steps to reduce the risk of mosquito bites around the home, according to the Missouri Division of Health and Senior Services ”Eliminate standing water from flower pots, barrels, used tires, clogged roof gutters or any water holding container. Birdbaths should be cleaned out every couple of days and refilled with fresh water. The kinds of mosquitoes that transmit West Nile Virus are container breeders in such places as birdbaths. Residents should also change the water in pet dishes and drill holes in tire swings so water can drain out. Keep children’s wading pools empty and on their sides when they are not in use. Homeowners should install or repair window and door screens to keep mosquitoes out. It’s also important to keep the grass cut short so adult mosquitoes will not stay in the grass.”

It was reported this past week that mosquitoes in St. Louis were found to be carrying West Nile Virus. This will not be a problem for just St. Louis, as it is very likely that mosquitoes will be found with West Nile Virus here and a problem which residents should be aware of and even more reason to take personal protection against mosquito bites. About one in 150 people infected with West Nile Virus will develop severe illness. The severe symptoms can include high fever, headache, neck stiffness, stupor, disorientation, coma, tremors, convulsions, muscle weakness, vision loss, numbness and paralysis.

Up to 20% of the people who are infected with the West Nile Virus have the milder symptoms such as fever, headache and body aches, nausea, vomiting, and sometimes swollen lymph glands or a skin rash on the chest, stomach and back.
Approximately 80% of people (about 4 out of 5) who are infected with West Nile Virus will not show any symptoms at all.

Even if the mosquito is not transmitting West Nile Virus, as most do not, the bite can still be annoying and irritating, especially for children. And of course children will want to scratch the bite or rub it. According to Evelena Sutterfield, Clark County Health Department Administrator, “Parents can treat that irritation with any over the counter first aide cream or take Benadryle.”

GETTING TO KNOW THE ENEMY
The mosquito’s visual picture is an infrared view produced by its prey’s body temperature.
• The average life span of the female mosquito is 3 to 100 days; the male’s is 10 to 20 days.
• Mosquito adults feed on flower nectar and juices of fruits for flight energy.
• The female requires a blood meal for egg development
• Depending on species, female mosquitoes may lay 100 to 300 eggs at a time and may average 1,000 to 3,000 during their lifespan.
• The mosquito matures from egg to adult in 4 to 7 days.
• Most mosquitoes remain within 1 mile of their breeding site. A few species may range up to 20 miles or more.
• Several mosquito species are known carriers of significant diseases of man and domestic animals.
• There are 140 different kinds in the world.
• Female Mosquitoes are attracted to carbon-dioxide and will pierce the skin of people and other warm-blooded animals to suck blood, causing a painful swelling.
• The larvae feed on algae and organic matter. They are full grown in 2 – 14 days.
• The pupae still swim about actively, but do not feed as pupae. Eyes, legs and wings can be seen developing.
• Adults emerge after 1 – 14 days.

The Life Cycle of a Mosquito
The mosquito goes through four separate and distinct stages of its life cycle: Egg, Larva, Pupa, and Adult. Each of these stages can be easily recognized by their special appearance.
Egg : Eggs are laid one at a time and they float on the surface of the water. In the case of Culex and Culiseta species, the eggs are stuck together in rafts of a hundred or more eggs. Anopheles and Aedes species do not make egg rafts but lay their eggs separately. Culex, Culiseta, and Anopheles lay their eggs on water while Aedes lay their eggs on damp soil that will be flooded by water. Most eggs hatch into larvae within 48 hours.
Larva : The larva (larvae – plural) live in the water and come to the surface to breathe. They shed (molt) their skin four times, growing larger after each molting. Most larvae have siphon tubes for breathing and hang from the water surface. Anopheles larvae do not have a siphon and lay parallel to the water surface to get a supply of oxygen through a breathing opening. The larvae feed on micro-organisms and organic matter in the water. On the fourth molt the larva changes into a pupa.

Pupa: The pupal stage is a resting, non-feeding stage. This is the time the mosquito turns into an adult. It takes about two days before the adult is fully developed. When development is complete, the pupal skin splits and the mosquito emerges as an adult.
Adult: The newly emerged adult rests on the surface of the water for a short time to allow itself to dry and all its body parts to harden. The wings have to spread out and dry properly before it can fly.

The egg, larvae and pupae stages depend on temperature and species characteristics as to how long they take for development. For instance, Culex tarsalis , a common California, USA mosquito, might go through its life cycle in 14 days at 70 F and take only 10 days at 80 F. Also, some species have naturally adapted to go through their entire life cycle in as little as four days or as long as one month.
Culex mosquitoes lay their eggs on the surface of fresh or stagnant water. The water may be in tin cans, barrels, horse troughs, ornamental ponds, swimming pools, puddles, creeks, ditches, or marshy areas. Mosquitoes prefer water sheltered from the wind by grass and weeds.

Culex mosquitoes usually lay their eggs at night. A mosquito may lay a raft of eggs every third night during its life span.

Culex mosquitoes lay their eggs one at a time, sticking them together to form a raft of from 200- 300 eggs. A raft of eggs looks like a speck of soot floating on the water and is about 1/4 inch long and 1/8 inch wide.

Tiny mosquito larvae emerge from the eggs within 24 hours.
Mosquito larvae, commonly called “wigglers”, must live in water from 7 to 14 days depending on water temperature.

Larvae must come to the surface often to get oxygen through a breathing tube called a siphon. The larvae eat algae and small organisms which live in the water.
During growth, the larva molts (sheds its skin) four times. The stages between molts are called instars. At the 4th instar, the larva reaches a length of almost 1/2 inch.
When the 4th instar larva molts it becomes a pupa.

Mosquito pupae, commonly called “tumblers,” must live in water from 1 to 4 days, depending upon species and temperature.

Because the pupa is lighter than water, it floats at the surface. It takes oxygen through two breathing tubes called “trumpets.” When it is disturbed it dives in a jerking, tumbling motion and then floats back to the surface. The pupa does not eat.

The metamorphosis of the mosquito into an adult is completed within the pupal case.
The adult mosquito splits the pupal case and emerges to the surface of the water where it rests until its body can dry and harden.

Aedes mosquitoes are painful and persistent biters, attacking during daylight hours (not at night). They do not enter dwellings, and they prefer to bite mammals like humans. Aedes mosquitoes are strong fliers and are known to fly many miles from their breeding sources.

Culex mosquitoes are painful and persistent biters also, but prefer to attack at dusk and after dark, and readily enter dwellings for blood meals. Domestic and wild birds are preferred over man, cows, and horses. Culex nigripalpus is known to transmit encephalitis (sleeping sickness) to man and horses in Florida. Culex are generally weak fliers and do not move far from home, although they have been known to fly up to two miles. Culex usually live only a few weeks during the warm summer months. Those females which emerge in late summer search for sheltered areas where they “hibernate” until spring. Warm weather brings them out in search of water on which to lay their eggs.
Culiseta mosquitoes are moderately aggressive biters, attacking in the evening hours or in shade during the day.

Anopheles mosquitoes are the only mosquito which transmits malaria to man.