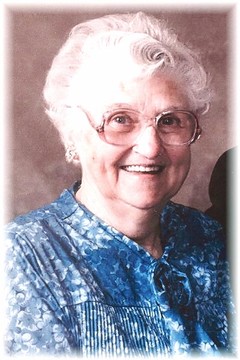 She was born February 16, 1916 in Nebraska City, Nebraska, the daughter of William and Anna Mae Orton Ransford. On August 29, 1932, she was united in marriage to Frank Wood. To this union two children were born. She was then united in marriage to Elza March on May 17, 1941 in Kirksville, Missouri. He preceded her in death on March 16, 1995.

Viola was a farmer’s wife and a mother to her children and her half brothers and sisters. She resided most of her life in Clark and Scotland counties. She enjoyed gardening and reading, but most of all she loved her family and being with them and helping them anyway that she could.

She was baptized at the age of nine in the Christian Church in Memphis, Missouri.

Funeral services were held at 1 p.m., Sunday at the Vigen Memorial Home in Kahoka, MO. Burial was in the Bible Grove Cemetery in Baring, MO.

Visitation was held after 2 p .m. Saturday with the family meeting with friends from 6 – 8 p.m. at the funeral home.

Musical selections were “How Great Thou Art,” and “Mansion Over the Hilltop.” Organist was Bonnie Vineyard and soloist was Wayne Blum.