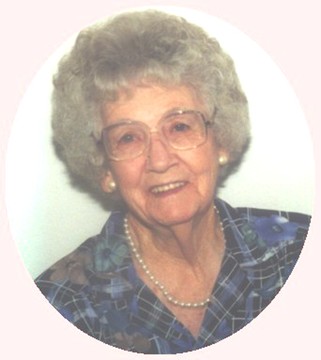 She was born October 17, 1909 at Colusa, IL, a daughter of JohnhFranklin and Florence Elizabeth Glassburn Goff.

She married Virgil V. Hodges on April 16, 1938, at Moberly, MO. He preceded her in death on January 6, 1996. Early in their married life they ran outdoor movies with a circuit up and down the east coast as well as in this area. They farmed in Clark County for approximately ten years before moving to Canton where they operated several small businesses.

She was preceded in death by her parents; her husband; two brothers, Raymond and Ernest Goff; and, three sisters, Velma Harvey, Elsie Goff, and Goldie Goff.

Viola graduated from Kahoka High School and received her B.S. degree from Kirksville. She was a retired elementary and head start teacher. She taught her early years in Clark County, a short time in Iowa, later returning to teach in rural Clark and Lewis Counties. She was an original one-room school teacher, riding her horse to school where she fired up the stove daily and sometimes cooked lunch for her students with a variety of ingredients provided by herself and what the students brought from home. She loved her students and was known for her art work which decorated her classrooms. She was so effective and well thought of as a teacher that some students contacted her even after fifty years to thank her and maintained life-long relation-ships. Following her retirement after 39 years of teaching, she taught G.E.D. classes in Keokuk.
V

iola was in fellowship with Jehovah Witness in their Canton congregation as long as her health permitted. She was talented as an artist and enjoyed ceramics, crocheting and quilting. She was a wonderful mother and grandmother whose love and faith reached out to them and others.

A Celebration of her life will be held Thursday, July 24, 2008, at 3 p.m. at Wilson Funeral Home in Kahoka with Frank Dohman officiating.

Burial will follow in the Kahoka Cemetery.
Friends can call at Wilson Funeral Home in Kahoka after 9 a.m. on Wednesday with family receiving friends from 6-8 p.m.
Memorials are suggested to the American Heart Association.