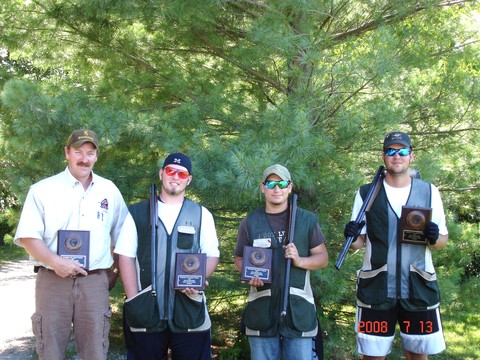 The SCTP program is for students from grades 5-12. Brandon Gudehus participates on the Knox County High School FFA trap shooting team. Mitchell Penn, Justin Rudd and Heath Hunziker are expected to participate in the 2008 KCHS trap shooting team along with Gudehus this fall.

Brandon Gudehus sighted down the barrels of his Browning over and under shotgun at the 2008 4-H Nationals. Missouri took second in the nation finishing behind defending national champion Texas.
The National shooting meet combined trap, skeet and sporting clay shooting. Brandon Gudehus scored a 68 out of 100 in sporting clays, 95 of 100 in trap shooting and 91 out of 100 in skeet shooting.
“It was really an experience, said Brandon Gudehus of the National meet. “I got to meet a log of people. I didn’t have a very good first four rounds but I was able to come on in the last two rounds.”
Shooters attempted 50 targets per round with a total of 300 total shots fired. “Our class has a lot of talented people,” said Gudehus of the Knox County High School Class of 2009. Eight Knox County student-athletes earned all-state athletic honors during the 2007-08 school year.

The Missouri teams participating in the state title shot qualified for the SCTP National Championships July 31-August 5 at the World Shooting and Recreational complex at Sparta, Illinois. The three mile long range is considered the largest trap shooting range in the world.
Brandon Gudehus is the son of Alan and Martha Gudehus of Edina.