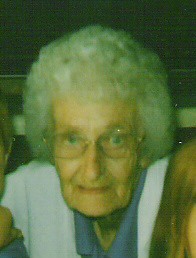 Born August 9, 1918 at Clark County, Missouri, she was the daughter of Leonard W. and Myrtle E. Coffin Nixon.
On December 23, 1962, at Kahoka, Missouri, she married Charles P. Olden.

Survivors include one niece Darla L. (Todd) Moylan of Keokuk, Iowa, and two great nephews David Justin Burke, Kevin William Burke, and one great niece Kimberly Lynne Burke.
She was preceded in death by one brother Eston L. Nixon and one sister Estella I. Criswell.

Elma was a member of the Farmington United Methodist Church. She worked for Sheaffer Pen for 32 years and the Donnellson Care Center for six years.

Funeral services for Elma Olden will be at 10:00 A.M. Saturday, August 2, 2008 at the Schmitz-Lynk Funeral Home & Crematory in Farmington with Reverend Larry Wallingford officiating. Burial will be in the Christy Cemetery in Farmington.