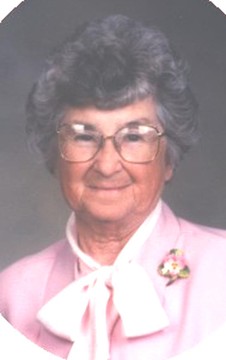 Eva Dale Boon, age 88, of rural Luray, MO, died peacefully Wednesday, July 30, 2008, at the Clark Co. Nursing Home in Kahoka where she had been a resident the past week.

She was born June 10, 1920 at Edina, MO, to Herman and Isabelle Stutsman Coffey.

She and Robert E. Boon were married September 3, 1944 at the Santa Fe Avenue United Methodist Church in Fort Madison, IA.
Survivors include her husband, Robert, of Luray; her twin daughters, Virginia Warheit of Menlo Park, CA and Vivian Murphy of Keokuk, IA; a brother, Frederick Coffey and his wife, Ruth, of Wever, IA; a sister, Alberta Tipton of Mt. Pleasant, IA; two sisters-in-law, Shirley Boon of Fort Madison, IA and Lola May Boon of Adel, IA; three grandchildren: Vanessa Ingle Warheit and her husband Nicholas Ingle of Vancouver, BC, Jennifer Murphy of Milan, IL and Timothy Murphy and his wife, Tracy, of Luray, MO; four great-grandchildren: Elliot Ingle, Cameron Moody, Lauren Moody and Tony Murphy; as well as nieces, nephews and other relatives.

She was preceded in death by her parents; a brother, Larry Coffey; and a great-grandchild, Ryan Michael Murphy.
Eva Dale graduated from Fort Madison High School in 1938 and worked at Sheaffer Pen until her marriage, when she moved to Benicia, CA, where Bob was stationed during World War II. They returned to Fort Madison in 1946 and in 1954 moved to Clark County, Missouri, where they farmed and raised their family.
Eva and Robert were both members of the Santa Fe United Methodist Church in Fort Madison and later the Revere Community Church. They attended the Kahoka United Methodist Church in more recent years. Church and family were important to her and she taught Sunday school and bible study for many years, beginning in high school. She was also active in the Women’s Aid Society of the Revere Community Church. Her Christian love extended beyond this area to include the Christian Children’s Fund, to which she and Bob have been devoted for decades. She was also a member of the former Chambersburg Jolly Dozen Extension Club and a 4-H leader. Eva Dale had 50 first cousins, and for over 50 years faithfully attended the Stutsman family reunion at Edina, never missing one. She was an excellent baker, cook and seamstress. She also found beauty in nature and expressed her talent through her oil paintings. She was a helpmate, mother, grandmother, and true example to others in her Christian witness.

Funeral services were held Friday, August 1, 2008, at 2 p.m. at Wilson Funeral Home in Kahoka with Rev. William S. Mitchell officiating. Also participating were Jennifer Murphy and Vanessa Ingle Warheit. Music was provided by Mrs. Amah Lou Schreiber was pianist and Mr. Mike Murphy, vocalist. Selections were “Under His Wings”, “Whispering Hope”, and “O There Will Be Glory”.

Burial was in Chambersburg Cemetery.

Memorials were suggested to Chambersburg Cemetery.
On-line condolences may be expressed at www.timeformemory.com/wilsonfh.