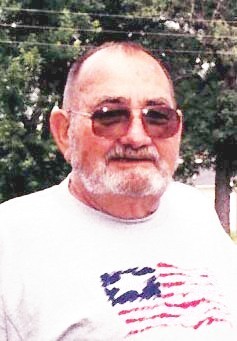 Robert Bishoff, age 77 died at his home in LaBelle, MO on August 2, 2008.
He was born July 2, 1931 in Kansas City, MO to George W. and Rachel Mumford Bishoff, who preceded him in death. He was also preceded by his wives Maria Adele (Mikey) and Marilyn Virginia (Ginny).
Robert loved attending and was a member of the Christian Church in LaBelle. He was a member of the Jackson, MS Local 114 International Association of Heat and Frost and Asbestos Workers since 1954, retiring in 1993. He received a 50 year honorary pin in 2004.
He was a Naval Veteran and a long time member of the LaBelle American Legion Post #200. He was an avid motorcycle rider, loved to travel and visit his children and grandchildren. He was very poetic and had several poems published.
Robert enjoyed life to the fullest and was always helping anyone who needed help. He was loved by many.
Survivors include Michael Bishoff and special friend, Sharon Hutcheson of Caryn Crow, LA; Robin and Hugo Rojas, of Urbana, IL; Rhonda McConnell of Ogden, IL; Kelly and Mike Walker of Florence, MS; Alan and Tracy Howes of Brashear, MO; Marilyn and Darrin Miholovich of Greentop, MO; Mary and Vance Lesseig, of New Braunfels, TX; Joe and Joyce Howes of LaBelle, MO; Jeff and Kathy Howes of Perry, FL; Doug Howes of LaBelle, MO; Steven and Maria Howes of LaBelle, MO and Bill and Diane Howes of Globe, AZ.
Also surviving are 6 grandchildren, 1 great-grandchild, 25 step-grandchildren, four step-great-grandchildren; one brother, William Monte Bishoff and wife, Elsie, of Florence, MS; and a special aunt, Etta Hudnut of Palmyra, MO; four nephews and a number of cousins.
A memorial service was held Wednesday, August 6, 2008 at the LaBelle Christian Church, with Pastor Joe Jorgenson officiating. Burial was at 10 a.m. Friday, August 8, 2008 at the Glenwood Memorial Park, Richland, MS. Memorials may be given to Hospice of Northeast Missouri and may be left at or mailed to Coder Funeral Chapel, Box 151, LaBelle, MO 63447.