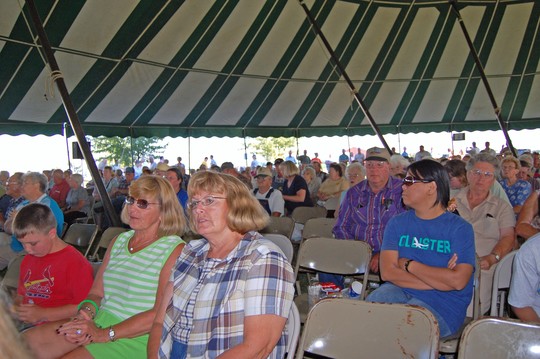 The members of the Lewis County Rural Electric Cooperative gathered for an evening meeting under the big top tent on the Lewis County Fair Grounds on August 7, 2008 to celebrate the 71st Annual Meeting.

Emery Geisendorfer Jr., President of the Board of Directors, called the meeting to order. John Bloom, General Manager/CEO reported that Lewis County REC is in very sound financial condition and ended 2008 with margins of $653,000. He also reported on the challenges that the electric industry will face in the near future, and presented employees and directors with pins for years of service.

There were 297 members registered to vote and approximately 1000 people were served dinner. The members elected three directors to serve a 3 year term to expire in 2011. Elected to the board were Mike Schantz, Luray, Donald Shouse, Bethel, and John (Jack) Reardon, Edina. The Mystery Train Band performed and there were free children’s games.

Attendance prizes were given and there were other drawings for prizes throughout the evening. The grand prize winner of a $400 energy certificate was Bettie Morriss, and the child’s grand prize, an electric scooter, was won by Jordan Hale. The youngest person in attendance was Gage Daniel 9 months and the oldest was Mildred Raleigh 102. Mr. and Mrs. L.C. Swisher received the prize for being married the longest, 65 years.

“It was a great day for the meeting, and it’s really an honor to have Senator Bond in attendance, John Bloom, General Manager/CEO said.