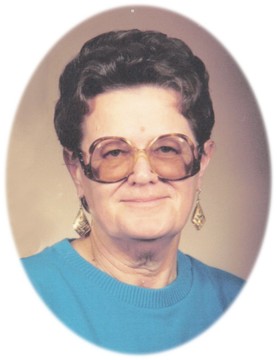 Rosalie Harrell, 71, of Edina, Missouri, died Friday, August 15, 2008, at the Northeast Regional Medical Center in Kirksville, Missouri.
She was born on November 18, 1936, in Edina, Missouri, the daughter of Alba and Grace Hudson Patterson.
Rosalie was raised in Edina, Missouri and attended the Edina Grade School and graduated from the Edina High School in the Class of 1954. She moved to St. Louis, Missouri in 1960 worked for several businesses before retiring from the St. Louis Bread Company and returning to Edina in 2004.
On August 13, 1954, in Quincy, Illinois, she married John Arthur Ewalt and to this union two boys were born. Rosalie married Hubert “Wayne” Harrell, Jr. on June 21, 1974, in East St. Louis, Missouri and he survives of the home.
She was a member of the Edina United Methodist Church in Edina, Missouri and enjoyed animals, including turtles but most of all she loved her grandchildren.
Rosalie is survived by her husband, Hubert “Wayne” Harrell of Edina, Missouri; two sons, Fred C. and his wife Carol Ewalt of Jefferson City, Missouri and Tony and his wife Terry Ewalt of Edina, Missouri; a sister, Vada and her husband Marvin Martin of Chariton, Iowa; two sisters-in-law, Althea Patterson of Columbia, Missouri and Donna Patterson of Edina, Missouri; six grandchildren, Nellie and her fiancé Jason Caldwell, Ashley and her fiancé Gary Cahalan, Amanda, Alanna and her fiancé J.R. Findling, Anna and Kaitlyn; two great grandchildren, Trysta and Lexi; along with numerous nieces, nephews, cousins and a host of friends.
Rosalie was preceded in death by her parents, Alba and Grace Patterson; three brothers Leon and his wife Louise Patterson, Kenny Patterson, and Clinton Patterson; a brother-in-law, Charles Harrell; and three sisters-in-law, Doris Ann Moore, Helen Harvey and Vivian Walker.
A Memorial Service will be held Saturday, August 23, 2008, at 7:00 p.m. at the Doss Funeral Home in Edina, Missouri with Pastor Nancy Douglas officiating.
The family will receive friends Saturday evening, August 23, 2008, from 5:00 to 7:00 p.m. at the funeral home in Edina, Missouri.
An expression of sympathy in memory of Rosalie Harrell may be left to the Kidney Foundation. A memorial may be left at or mailed to the Doss Funeral Home 208 N. 4th Street, Edina, Missouri 63537.