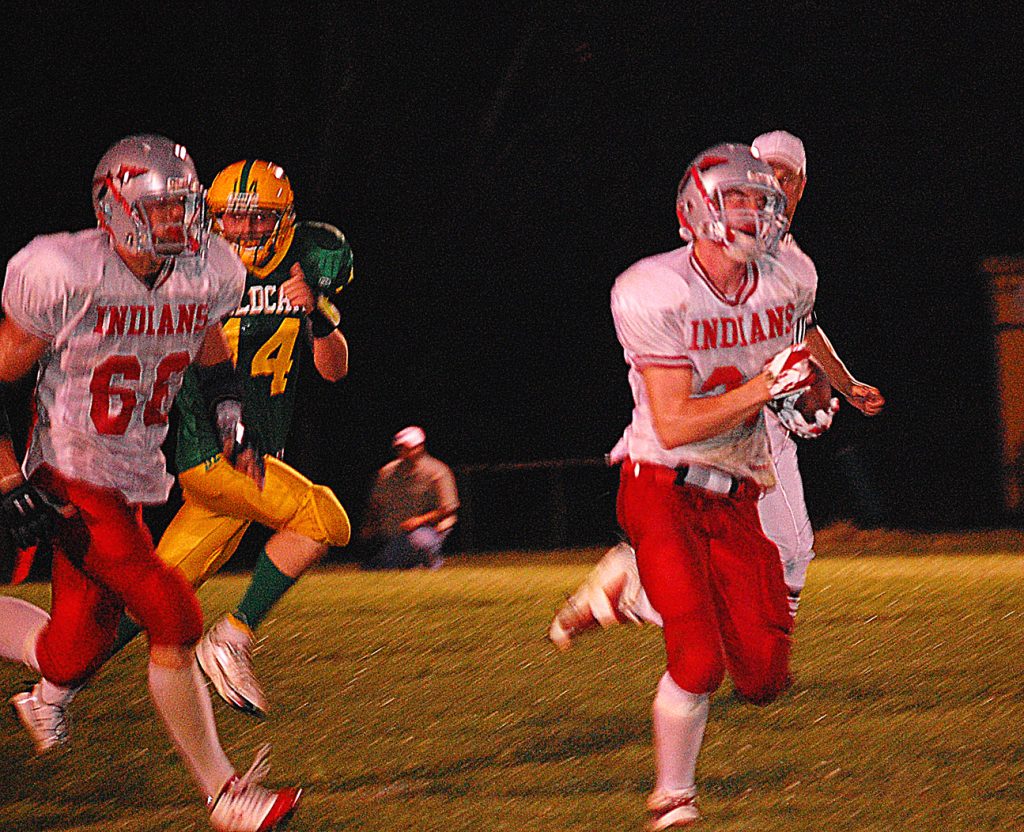 The statistics don’t show the lopsided victory the Clark County Indians pulled off over Milan in their 2008 season opener. If you look at only three first downs and 64 yards of passing, you might wonder if the Indian offense showed up for the game. But then 325 yards rushing on 16 carries tells the rest of the story–the Indians dominated the night on big plays.

The big story of the night was senior Javis Vineyard, who scored racked up 265 yards and five touchdowns for Clark County, with only seven carries of the ball.

The Wildcats won the coin toss, and elected to receive the football to start the game. Milan started their first possession after returning the kickoff to the 25-yard line.
Milan earned a quick first down as the Indian defense started slowly, but the Indian quickly adjusted and stopped the drive, forcing the Wildcats to punt.

The Indians started their drive on their own 43-yard line. After a incomplete pass, Vineyard scored on a 57-yard run. The extra point missed, and the Indians led 6-0 with 9:12 left in the first quarter.

The Indians got the ball back after forcing another Milan punt, and scored on their first play from scrimmage, as Ethan Allen connected with Bryan Plenge on 59 yard touchdown pass. Kolt Kiger’s extra point kick was good, and the Indians led 13-0 at the 7:41 mark.

Milan moved the ball deep into Indian territory before fumbling the ball. Plenge recovered the loose ball for the Indians, and Clark County took over on their own 23-yard line. Javis Vineyard broke through the line and gave the Wildcats a lesson in speed as he raced 77 yard for his second TD of the quarter. Derek Ryan’s PAT kick was good, and the Indians led 20-0 with 6:22.

Milan’s next drive ended with a fumble, and the Indians started on the Milan 31-yard line. Ethan Allen kept the ball and gained a first down, but a Milan player was injured, causing a long delay in the game as he left the stadium in an ambulance.
After play resumed, Vineyard ripped 20 yards untouched into the end zone with 4:42 on the clock, and the Indians took a 27-0 lead.

The Indians started the second quarter with the ball, and completed a long pass to Matt Morrow, who was stopped at the Milan 13-yard line, setting up another TD by Vineyard, this time a two yard run with 10:15 in the second quarter for a 34-0 lead.
Milan’s possession went nowhere, as Michael Brennan ended any Wildcat hopes of a sustained drive as he brought down the quarterback for a loss, bringing up a 4th and 14 play, and Milan punted.

The Indians couldn’t capitalize on this possession, and were also forced to punt the ball.
Milan sustained a drive deep into Big Red territory before coughing the ball up, which was quickly recovered by Ethan Horton and returned 65 yards for a touchdown, giving the Indians 40-0 halftime lead.

Milan caught the Indian kick return team sleeping with an onside kick to start the second half, and drove well into Indian territory. Milan worked their way down the field before putting Cooper Bankus scored on short run. The extra point attempt was blocked by Lynn Williams, and the Indians led 40-6.

The Indians pulled another quick score as Vineyard started going to the right, then cut back across the field for a 49-yard touchdown. The extra point was good, and the Indians coasted to a 47-6 victory over Milan.

The Indians host the Scotland County Tigers on Friday, September 5.