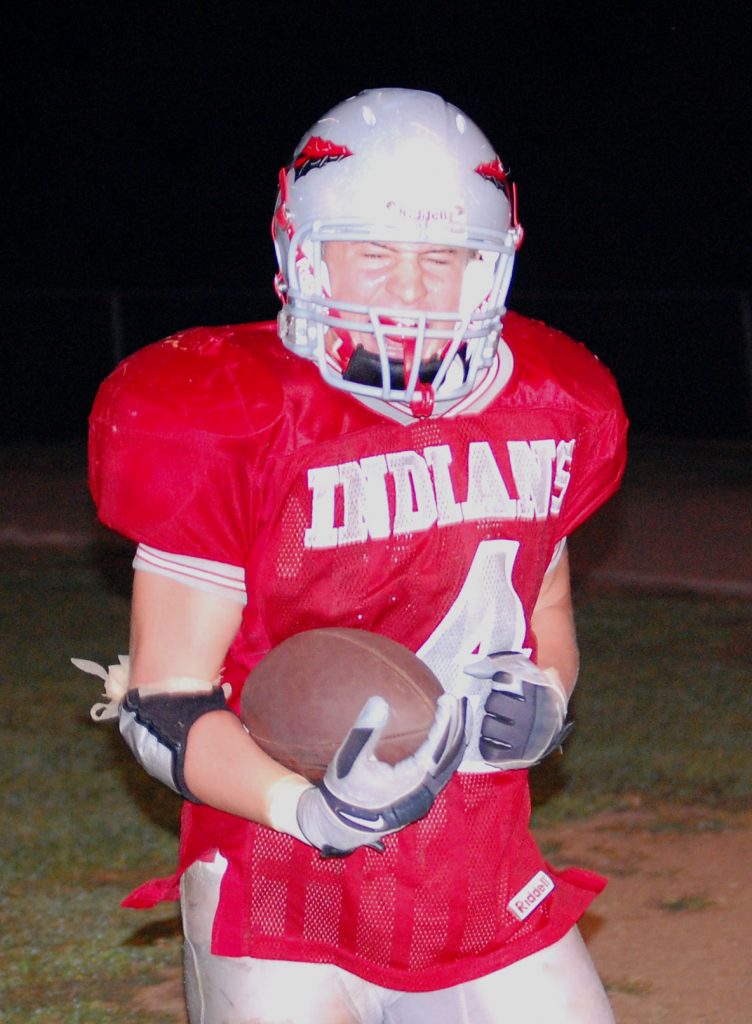 And there was no joy in P-Town, the mighty Panthers were shut out…

Friday night’s matchup between Clark County was nothing like the great 7-6 Indian victory last year.

Palmyra won the opening toss, and elected to receive the ball, but they were force to punt.  The Indians also struggled in their first possession, and punted the ball away

The Indians got their second chance on offense for the evening, starting at their own 10-yard line.  QB Ethan Allen handed off to Javis Vineyard, and he raced 90 yard for the first score of the evening.  After Kolt Kiger’s kick, Clark County led 7-0.

The Indian “D” held Palmyra again, and Clark County got the ball on the Panther 44.  Allen hit Matt Morrow with what looked like a 44 yd touchdown pass, but Morrow was rule out of bounds at the two yard line.  Vineyard pushed the ball into the end zone on the next play, and with 4:17 left in the first quarter, Clark County led 14-0.

Palmyra’s offense continued to struggle, but they move the ball into Clark County territory.  That drive ended with an interception near the goal line by Ethan Allen, who ran the ball all the way back to the end zone, but a penalty called the run back.

Allen completed a pass to Morrow to move the ball near midfield, but the drive stalled and Indians had to punt the ball.

The Indians got the ball back early in the second quarter, and it didn’t take long for Allen to connect with Mason Owen on a 20-yard TD pass, giving the Indians a 21-0 lead with 8:24 left in the half.

Clark County would get two more scores in the final minutes of the half.  At the 1:58 mark, Allen connected with Ethan Horton for a TD, and Kiger’s kick was good, giving the Indians a 28-0 lead.

Luck smiled one more time for the Indians as Michael Brennan blocked a Palmyra punt less than a minute later.  Vineyard scored on a two-yard run, giving the Indians a 34-0 halftime lead.

The second half opened with another quick Indian score, as Vineyard dashed 48 yards for a TD, and the Indians went up 40-0.

Justin Alderton got in the scoring column with a 28-yard touchdown run in the third quarter for a 46-0 lead.

The final score of the evening happened as Bryan Plenge picked up a Panther fumble and returned 70-some yards for a touchdown.

The final score was 52-0 Clark County.

For a full game story, check this week’s issue of The Media.