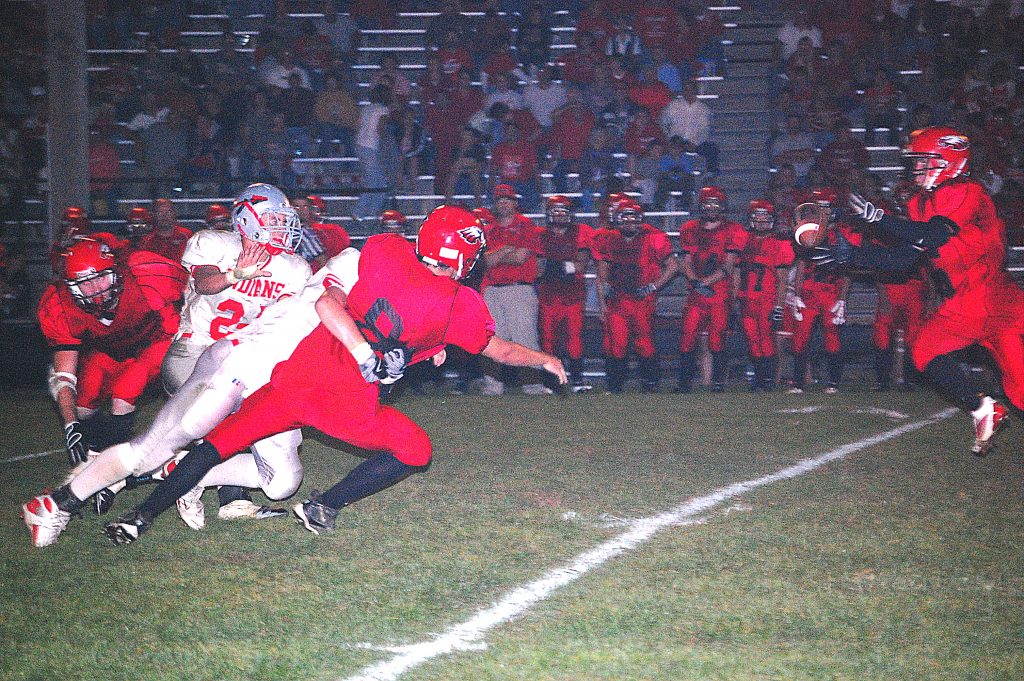 Knox County (0-5, 0-2) showed improvement on defense, especially considering the caliber of their opponent. Most of the positive Clark County plays were the result of Division I talent and great blocking. KCHS graduate Matt Smith and the Clark County community have built one of the finest football programs in the state of Missouri.
The potent Indian defense has allowed only one touchdown all season. Milan drove the football down the field and scored on their opening drive of the third quarter. Clark County’s outstanding defensive front stuffed the Eagles on their first series and forced a punt.

Javis Vineyard jab stepped to the perimeter and followed spread option blocking down the field for a 70 yard touchdown run at the 8:17 mark of the first quarter. Colt Kiger kicked the ball through the uprights on all six Indian touchdowns.

Lucas Hudson raced 59 yards with a wingback counter to the Clark County 20 yard line. Only the great speed of Javis Vineyard prevented a touchdown. The Eagles tried a fake field goal but were thwarted by the Clark County defense.

Javis Vineyard ran the ball in for a touchdown with 3:48 to play in the first quarter. The PAT kick put Clark County up by a 14-0 margin. Ethan Allen scored on a nifty looking 36 yard option play for an Indian score with 4:15 to play until intermission.

Five KCHS penalties for 35 yards compared to two flags for 20 yards on Clark County continued to be a problem for the Eagles.

Morton made good running plays out of the option attack. Brady Morton was second on the team in rushing with six attempts for 44 unofficial yards. Lucas Hudson led the Eagles with eight carries for 81 yards.

Clark County executed better offensively in the second half. The Indians erased whatever doubt there was of the final outcome, scoring on three straight third quarter possessions. Ethan Allen was 8-15 passing for 144 yards and a touchdown. Allen also rushed three times for 65 yards and a score.

“I felt like we did not do a lot of things as well as we could have in the first half,” said Clark County coach Matt Smith. “We had some nice runs. We just didn’t play well. That’s not taking anything away from Knox County. They played hard. They wanted to compete.”

“That was great, but we have to do better than that,” said Coach Smith who played football for Rob Cissell at Knox County. “We did not have the mental focus we needed to have in the first half. But at the same time, how dominant do you need to be? Is it really necessary to be up 50 (points) at halftime every week?”

Clark County has tremendous expectations from their community to go along with their great football team. The Indian coaching staff and players exhibit good sportsmanship every week. With their talent and the spread offense, there could be a lot more points on the board than are actually put up.

“I thought Knox County did a great job of milking the clock and playing hard,” said Coach Smith. “You have to get some (defensive) stops to make that work.”
Clark County had 15 first downs to eight KCHS first downs on the night. “They are a great team no doubt. They have tons of weapons,” said Knox County head coach Steve Ramer.

“Twenty one points at halftime is something we can deal with,” said Ramer. “We had opportunities to score. We still made a couple of mental errors in the first half. I truly believe we could play with anyone in the state if we play an error free football game.”

The Eagles played without Cody Morgenstern who missed the game due to a back injury. Two other younger players were reportedly academically ineligible. “Brady Morton did a (great) job for no more reps than he gets,” said Coach Ramer.

“We got what we needed to get out of this game. Our kids did a lot of things right tonight,” said Ramer. “They (Clark County) are truly the number one or two team in the state in Class 2. If we play well the rest of our schedule, we can do some things.”