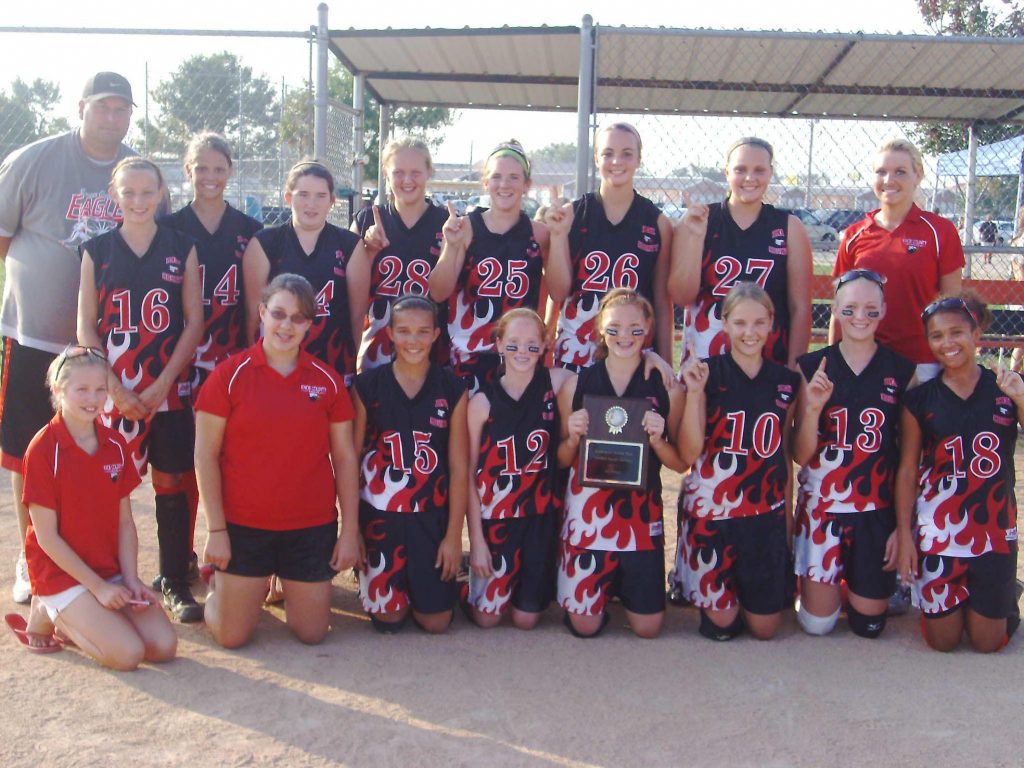 By David Sharp
Kalya Snelling doubled home two runs with two out in the bottom of the last inning powering Knox County (14-2) to a 5-4 victory in the championship game of the Kirksville Junior High Softball Tournament.
The crown is the first KCMS Kirksville Tournament championship in school history. This season’s team is a coop with Brashear.

“It was back and forth all day,” said Knox County coach Alan Garrett. “They hit the ball hard and had good pitching,” said Garrett of the Kirksville Junior High Lady Tigers. “We had people on in the bottom of the fifth. Kayla Snelling drove the ball to center field. We pulled one out of the hat.”

Kirksville took a two run lead in the first inning. Kenzie Bevill and Haley Phillips crossed the plate for the Lady Tigers. Knox County answered when Olivia Nichols tripled Bailey Couch and Rachel Poston in, tying the score at two after one inning of softball.
Haley Philips knocked Kenzie Bevill in with a two out RBI hit, putting Kirksville on top of a 3-2 score after three innings of play. Knox County mounted second and third inning threats but could not reach KV hurler Keaira Shilling for the big hit.

The Lady Eagles tied the game when Kayla Snelling slammed a leadoff double in the fourth frame and scored on Meredith Thomas’ two out RBI hit.

Breanne Vorkink doubled Kenzie Bevill in with the go ahead run in the top half of the fifth and final inning. Bevill scored three Lady Tiger runs and had two hits in four plate appearances.

Bailey Couch and Devin Gudehus stroked back-to-back KCMS singles leading off the bottom of the fifth inning. Keaira Shilling got the next two batters out. Kayla Snelling slammed the second pitch she saw into center field, scoring Couch and Gudehus with the tying and winning runs.

“That makes all the practice payoff,” commented KCMS coach Marcie McMahon. The game kept going back and forth. I kept telling them to fight back.”

“They wanted it more,” said McMahon of the Lady Eagles. “It was great to be a part of this game.”