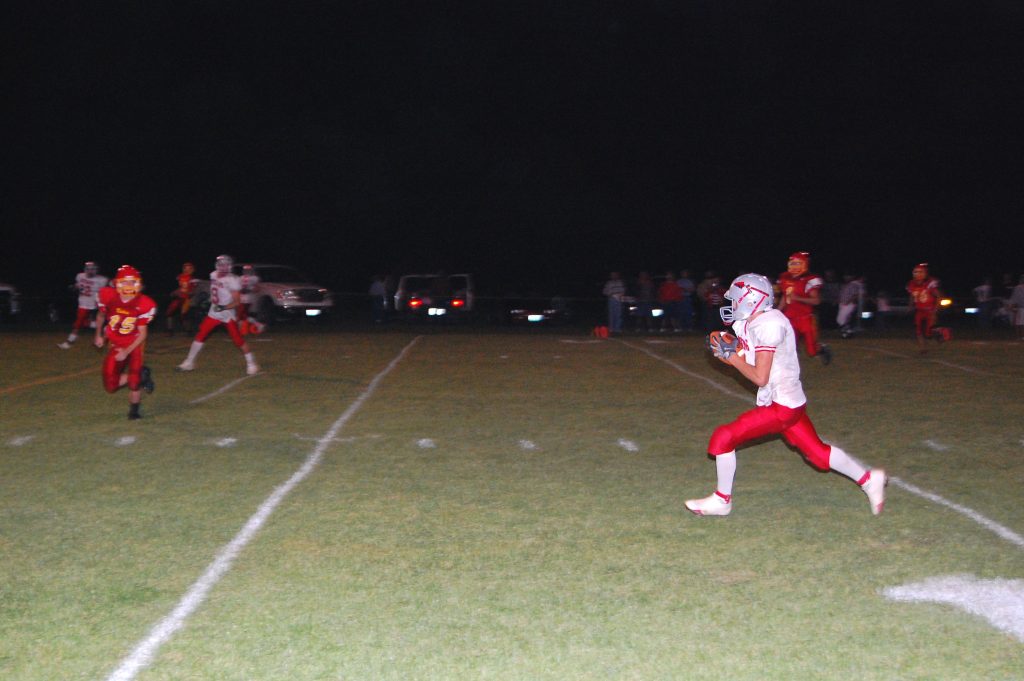 The Clark County Indians stayed perfect on the season with a 41-0 win on the road at North Shelby Friday night, but the Raiders made it a much closer game than the final score shows.

North Shelby’s opening drive stalled, and the Indians got the ball at about the 50 yard line.  Ethan Allen ran the ball to the 35, and Javis Vineyard took it from there, scoring on the next play to give the Indians a 6-0 lead.

North Shelby’s offense kicked in on their second possession, and they drove all the way to the Indian 2-yard line before being and pushed back.  The Raiders came up short on a 4th down and goal attempt from the 8 yard line, and the Indians took over on the one yard line.

Working out of his own end zone, Allen connected with Matt Morrow to give the Indians some room.  Vineyard took the ball to the 22 yard line on the next carry.  On the next play, Vineyard showed the Raiders his dangerous speed as he flew 78 yard for the touchdown.  Kolt Kiger’s extra point kick was good, and the Indians had a 13-0 led with 1:24 left in the first quarter.

The Raider’s next possession sputtered midfield, and Clark County started its next drive on the 45 yardline.  Again, Vineyard’s number was called, and he ran 38 yards for the score, and with 10:20 left in the half, Clakr County was up 20-0.

North Shelby threatened again on their next possession, getting to the Indian 30 before running into a Big Red wall.  After stopping the Raiders on a 4th and 11 attempt, the Indians took over on downs.

Clark County didn’t wast any time driving back into Raider territory, and Allen capped the drive with a 35 yard TD run. After Kiger’s PAT kick, the Indians led 27-0.

The Indians would score one more time in the first half, as Vineyard took a punt return all the way at the 1:37 mark to give Clark County a 34-0 halftime lead.

The Indians got the ball first in the second half, and wasted no time moving up the field.  Allen had a 42-yard run called back by a penalty, but then he connected with Mason Owen for a 26 yard touchdown pass.  The kick was good, and Clark County’s lead was 41-0.

The Raiders threatened again in the fourth quarter, driving again to the Indian 30 yard line.  Matt Morrow intercepted a Raider pass at the goal line to end their scoring hopes.

The Indians closed the game out driving into Raider territory through the running of Justin Alderton.  The Indians drove to the 10-yard line before taking a knee in the games’ final plays.