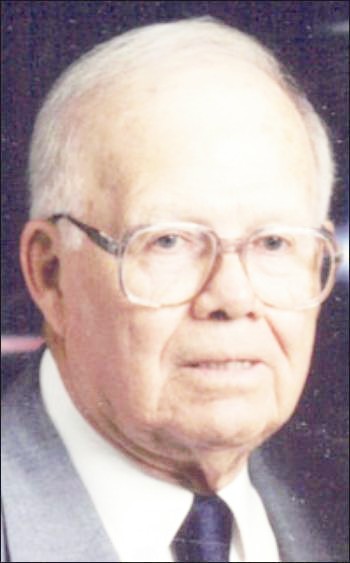 Stanley Eugene Fetters, 82, of Ottumwa, IA died Friday, September 26, 2008 at the VA Hospital in Iowa City, IA.
Eugene was born March 3, 1926 on a farm east of Greensburg, MO, the first child of Edgar and Ethel Ermyntrude Lowe Fetters.
He attended country school and then continued his education at Edina public school, the family moving there in 1936. While in school Eugene was very active in band, music and sports. He later coached some baseball teams and was active in the Babe Ruth Baseball Program. He graduated in 1943 and later joined the US Navy, where he served as a gunner on the destroyer ship, USS Samuel S. Miles DE183.
On November 4, 1947 he was united in marriage to Velma Josephine Ludwig.
He was a salesman for many different companies living in different cities, a motel manager at Hidden Inn Lake, Warsaw, MO and The Oxford Inn at Monett, MO. He was member of the Edina Masonic Lodge, the Davis Street Christian Church of Ottumwa and a lifetime member of the VFW. Eugene loved his family very much, was always joking around with them, and most usually had a smile on his face. He will be missed by all who knew him.
He is survived by a son, Gary Eugene Fetters of Tulsa, OK; seven grandchildren, Shanon and Major James Mattox of Dupont, WA, Jaimie and Andrea Fetters of Oklahoma, Julia and Scott Akins of Kentucky, Anthony and Phyliss Thomas of Neosho, MO, Erica Thomas of Ottumwa, IA and Alex Thomas; one sister, Rita Waibel of Edina, MO; a brother, Larry Edgar Fetters and wife, Margaret, of Muscatine, IA; four great-grandchildren, Grant and Joel Thomas and Zachary and Rebecca Mattox; and several nieces and nephews. He also leaves behind numerous great-great nieces and nephews, cousins and friends, and special friend, Fran Wilson.
He was preceded in death by his parents; a grandson; a daughter, Vickie Jean Thomas in 1994; and his wife, Velma in 2002.
Funeral arrangements were under the direction of Robertson-Jay Funeral Home in Ottumwa, IA, where services were held on Tuesday, September 30, 2008, with the Rev. Tom Carpe officiating. Pallbearers were Roger Waibel, Charles (C.K.) Chadwell, Kelly Hayes, David Fetters, John Fetters and Anthony Thomas.
Burial was in Memorial Lawn Cemetery, Ottumwa, IA with full military honors conducted by the American Legion and VFW.
Memorials can be made to the American Legion or VFW. Relatives attending from the Edina area were Rita Waibel, Roger and Tina Waibel, Kelly and Lacy Hayes and Kisha Goodwin, Gina Campbell and Charles Chadwell of Sprinfield, IL and Rhonda Chadwell Weed from Cantonment, FL.