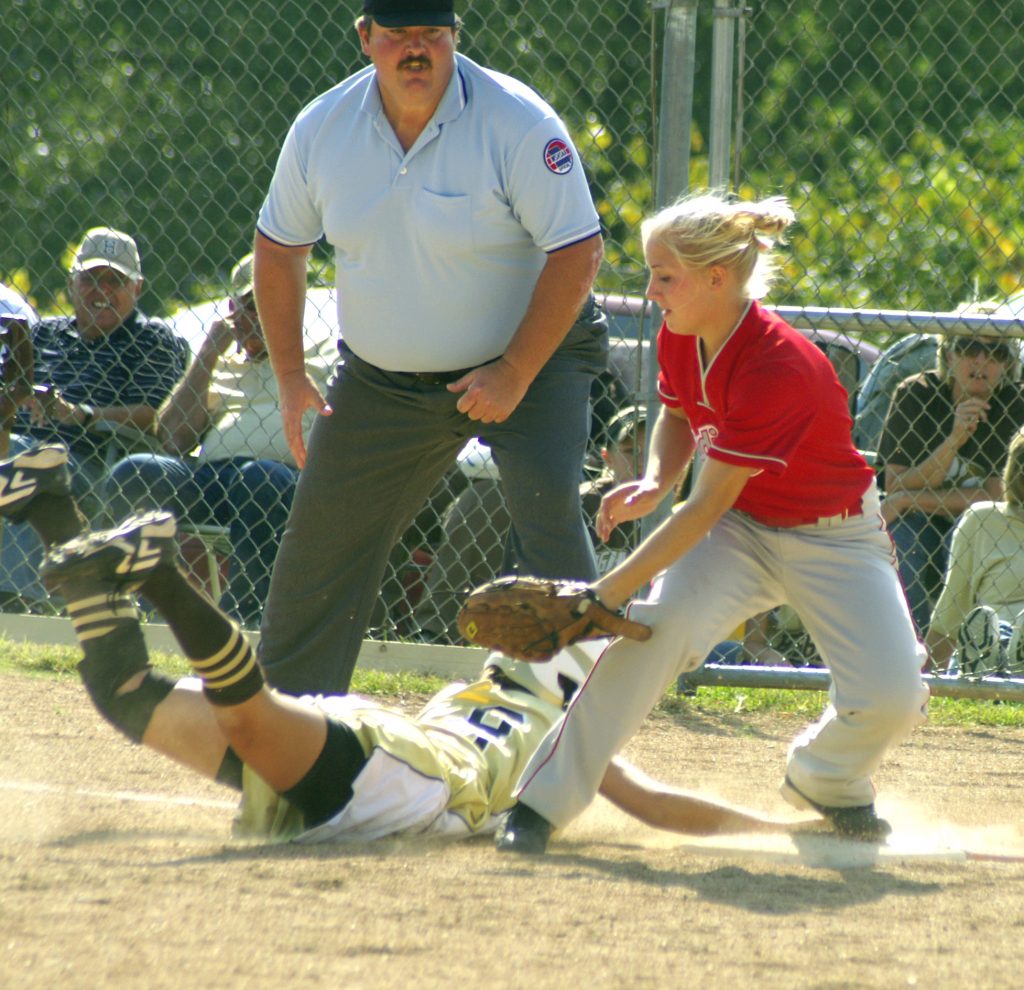 Clark County went into Class 2 District 12 play as the only team in a very tough softball district without a winning record. Their overall record resulted in the Lady Indians being seeded last in a six team district.

Clark County beat Knox County in conference play and knocked off the third seeded Lady Eagles (10-8) in the first round of district play.
Highland came from the middle of the Clarence Cannon Conference pack to the fourth district seeding and a 1-0 district championship game victory.

The long time rival schools hooked up in a classic fastpitch softball game on October 11, 2008 in the district championship game at Scotland County.

Highland’s Jessica Murfin reached first base on an infield hit leading off the bottom of the seventh inning and scored when senior Ashlan Knoche grounded to the left side of the Clark County defense on a two strike count with one out.

Jessica Murfin beat the throw to the plate by an eyelash propelling Highland (13-7) to their first softball district crown since the Lady Cougars won the Class 2 championship with an unbeaten 24-0 record in 2005.

Both teams made great defensive plays throughout the contest. Cady Flood walked in the Clark County first inning and stole second base. Highland pitcher Julie Schultz fanned her counterpart to end the top of the first inning with no scoring.

Clark County (9-12) had the better of scoring chances. The eventual game winner was the only base runner Highland saw advance to third base the entire game.

Brianna Alderton raced to first base on a dropped third strike leading off the Clark County second inning. Highland third baseman Adrienne Myers made a great defensive stop, keeping runners off second and third base and perhaps a run off the board for the first out of the frame.

Alderton moved to second base on a wild pitch. Julie Shultz struck out the next two CC batters retiring the side. Highland first baseman Ashlan Knoche made a nice running catch of a foul pop up, taking an at bat away from Clark County batter Chelsea Edmondson leading off the third inning.

Highland made another sparkling defensive play when Adrienne Myers fielded a Britni Bertelli bunt and tired to second baseman Amanda Hinkle covering the bag for out number two. Hinkle got the game winning hit against Putnam County earlier in the tournament.
Julie Schultz led off the Cougar third inning with a hit. Clark County third baseman Brianna Alderton snared a line drive off the bat of Heather Rees and turned a double play picking Schultz off first base for the second out.

Brianna Alderton stroked a two out single in the Clark County fourth inning but was stranded when Julie Schultz fanned a batter ending the inning. Clark County first baseman Chelsea Edmondson dug a low throw out of the dirt, robbing Jessica Murfin of a chance to run the bases leading off the Highland fourth.
Clark County pressured Highland’s defense hard in the final three innings.

Deanna Shoup singled with one down in the Lady Indian fifth inning. Chelsea Edmondson reached on an error. Britni Bertelli walked, loading the bases with one out.

Morgan Bertelli drilled the softball to Highland second baseman Amanda Hinkle who fired to catcher Ashley Rundquist, cutting down Deanna Shoup at the plate for the second out. Freshman Jordan Plenge came in to run for Chelsea Edmondson at third base.
Julie Schultz fanned number three batter Cady Flood with the sacks jammed retiring the side with no runs scored. Chelsea Edmondson and Caitlin Davis made great defensive stops on consecutive at bats robbing Highland of two probable runners and ending the HHS sixth inning.

Brianna Alderson walked with one out in the Clark County sixth inning. After a strikeout, Caitlin Davis singled for the Lady Indians. Julie Schultz recorded another strikeout to end the inning.
Clark County had another shot to go ahead in the top half of inning seven. Chelsea Edmondson singled leading off the inning. Britni Bertelli sacrificed the runner to second base.

Morgan Bertelli and Cady Flood drew back to back bases on balls, loading the bases with one out. Jessica Murfin fielded Brooke Wheeler’s ground ball and forced a runner for the second out. Julie Schultz caught a pop fly to the infield for the third out.
Clark County wound up stranding 11 base runners on the day. Highland left one runner on base.

Jessica Murfin beat out an infield hit leading off the Highland seventh inning. Morgan Bertelli caught a foul ball off the bat of Chevie Wiseman for the first out. Ashley Rundquist reached on an infield error, putting Lady Cougars on first and second base.

The runners moved up to second and third base on a wild pitch. Ashlan Knoche battled Clark County hurler Brooke Wheeler to her final strike. “I knew I had two strikes,” said Knoche. “I had a bad swing. I knew I just had to come through for the team. I poked the ball to get Jess (Murfin) in.”

Knoche grounded to the left side of the Clark County infield. Jessica Murfin broke for the plate on contact. The throw home was a good one, but Murfin beat the close play for the game winner.

“It’s just a great feeling,” said Highland’s senior first baseman. “Coming in as the fourth seed we just didn’t know. We came in with our heads high and we just had to pull through for our coach.”
Highland (13-7) scored one run on two hits and two errors. The Lady Cougars stranded two runners. Ashley Rundquist was technically left on third base and Ashlan Knoche was stranded on first base on a fielder’s choice at the end of the game. Knoche earned the game winning RBI on the play. Julie Schultz and Jessica Murfin had the Lady Cougar hits.

“She didn’t let the pressure get to her,” commented Highland head coach Paul Scifres of freshman Julie Schultz’ mound effort. “Our defense stepped up behind her and made plays.”

Coach Scifres discussed the final inning of the contest. “That’s why Jessica (Murfin) is our leadoff hitter. She gets on. She’s so crafty. She gets on base and she is always looking for that chance to advance. We talked about her going in and sliding hard on a ground ball.”
“She went in, did just that and won the ball game,” said Scifres. “They put the ball in play,” said Paul Scifres of Clark County. “They had several runners on base. Our defense had to step up, and boy did they. They had several pressure packed situations, and they didn’t let it get to them.”

Clark County (9-12) was blanked on four hits and one error. The Lady Indians stranded 11 base runners on the day. Brooke Wheeler pitched a masterful game facing 22 batters with four strikeouts and on walks in six and one third innings pitched. Wheeler faced the minimum 18 batters during the first six innings of the district championship game.

“They gave their heart and souls all throughout the tournament and stayed together at the end,” said Clark County coach Denise Martin. “This is a milestone for our program. Clark County has not won a district (softball) tournament since 1998. The last time we played in (a district championship softball game) was 2001.”

“We are trying to get the program back to where it used to be,” said Coach Martin. “Every game is a battle but I’m just proud of the kids. We are under .500 but I feel we are a better team than that. Hitting has been our problem all year. We started hitting the ball in this tournament. (Julie Schultz) is a fine pitcher. She has a great future ahead of her.”

“At the same time, we wanted up there,” said Martin of the district championship. “It is disappointing. We have left a lot on base all year. It’s turned around in the past week or two.”
“You can replay the game a thousand times, and it doesn’t come down to the last play,” said Coach Martin. “We had plenty of people to score, and the meat of our lineup up. We just couldn’t deliver. It just wasn’t meant to be.”

Tournament officials moved the game from Putnam County when the district finalists were determined.