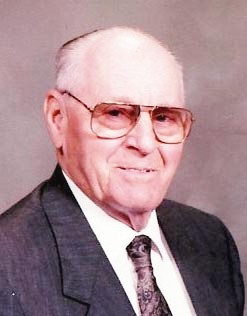 Lawrence William Fessler, age 96, of Mt. Pleasant, Iowa, formerly of Edina, Missouri, died Monday, October 13, 2008, at Mt. Pleasant, Iowa.
Lawrence was born on January 31, 1912, at Wien, Missouri, the son of Tony J. and Anna Schultz Fessler.
He was united in marriage to Fern Whitehead on June 16, 1941, at Macon, Missouri and she preceded him in death on August 9, 1980, and to this union two children were born.
On October 3, 1987, he was united in marriage to Esther Crawford and she preceded him in death on August 21, 1992.
Surviving are two children, Larry James Fessler of Hillsboro, Missouri and Carol Ann Moutrie and husband Alvin of Mt. Pleasant, Iowa, five grandchildren, Laurie Toft and husband Erik, Bradley Moutrie and wife Jennifer, Allison Clarke and husband Jonathan, Amanda Schara and husband Scott and Brenna Leith and husband Jim. He is also survived by seven great-grandchildren: Lexi and Kati Toft, Ryan & Jake Moutrie, Schuyler Leith, Tyler Clarke and Baily Schara, one brother, Clarence Fessler of Macon, Missouri, and two sisters, Geniveve McGraw and husband Donald of Lee’s Summit, Missouri and Sister Mary Ann Fessler of Atchinson, Kansas.
Lawrence was preceded in death by his parents, four brothers and their spouses, Andrew Fessler and wife Thelma, Leo Fessler and wife Kathleen, Virgil Fessler and wife Lorraine, Wilfred Fessler and wife Ann, one brother-in-law, Wilbur Whitehead and one sister-in-law, Connie Fessler.
Lawrence graduated from St. Mary’s School at Wien, Missouri. In 1936, Lawrence was employed as parts manager at the Chevrolet Garage in Macon, Missouri. In 1941, he was employed at the Chevrolet Dealership in Clarence, Missouri as general manager. From 1943 to 1945, Lawrence served his country in the United States Army during World War II. On August 1, 1949, Lawrence purchased the Chevrolet Dealership in Edina from R.L. Sigman and owned and operated the Fessler Motor Company in Edina for thirty-eight years retiring in 1977, when he sold the dealership to Earl Dromey.
Lawrence served on the board of Chevrolet Dealers Planning Committee, served as a director of the Missouri Auto Dealers Association, served on the board of Knox County Senior Housing as President for eighteen years, served on the American Cancer Society Board, served on the board of Knox County Council on Aging, served as Edina Councilman, member of American Legion, V.F.W., served on the Knox County Nutrition Board for over twenty years, and was a member of the St. Joseph Catholic Church where he had served on the Parish Council, Finance Committee, building committee, and was a member of the Knights of Columbus.
A Mass of Christian Burial was held at 11:00 a.m. on Friday, October 17, 2008, at the St. Joseph Catholic Church in Edina, Missouri. Father Joseph Hoi officiated the services. Burial with full Military Honors was in the St. Joseph Catholic Cemetery.
Music will be provided by Nancy Reardon, organist and Brent Karhoff, soloist.
Casket bearers will be Jack Reardon, Jerome Kriegshauser, Mike Fox, Joe Reardon, Albert Hagerla and George Hunolt.
Visitation was held prior to the funeral on Friday, October 17, 2008, from 9:00-11:00 a.m., with the Rosary at 10:00 a.m. at the Hudson-Rimer Funeral Home in Edina, Missouri.
Expressions of sympathy in memory of Lawrence William Fessler may be made to St. Joseph Catholic Church and the Edina Nutrition Site. Memorials may be left at or mailed to Hudson-Rimer Funeral Home, P.O. Box 1, Edina, Missouri, 63537.