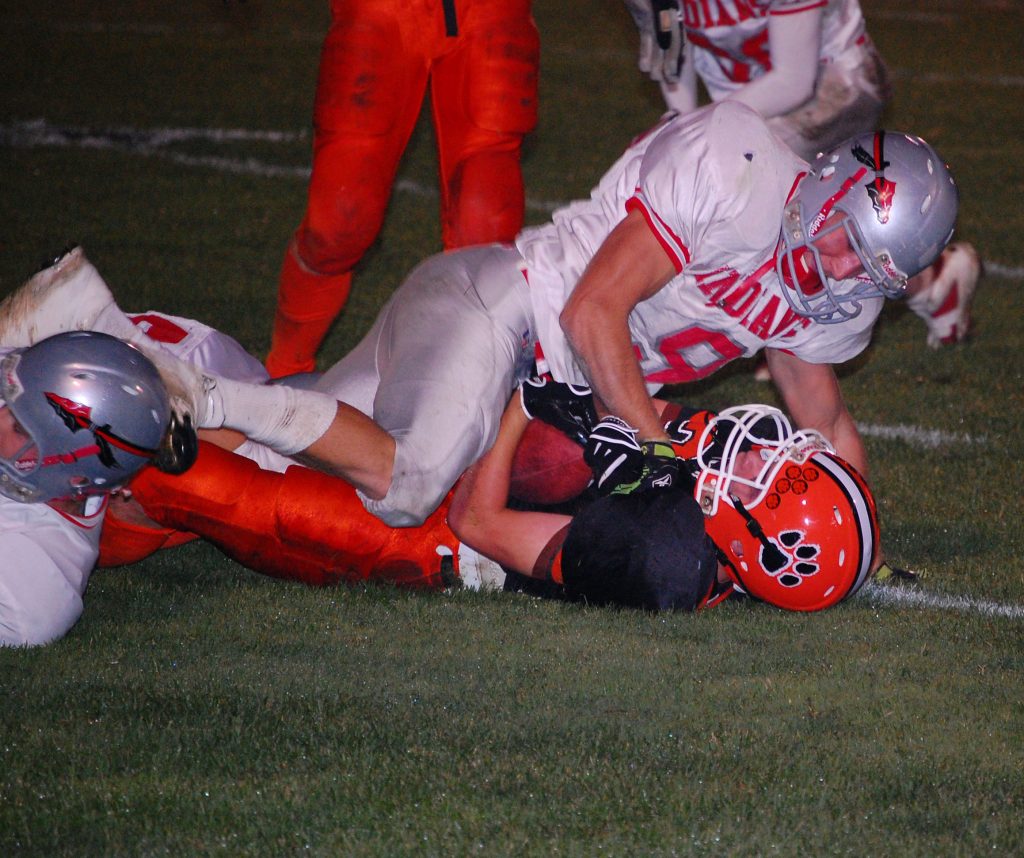 The undefeated Clark County Indians headed to Macon on Friday night, October 17, for their first District 8 matchup against the Macon Tigers. The Tigers have a big offensive line, and backs who know how to find holes to gain a few quick yards.

Macon started the contest with an onside kick, which was recovered by the Indians, giving them good starting field position for their first possession of the evening.
The Indians worked their way into Tiger territory, converting a fourth and short to get a first down on the 43 before Ethan Allen hit Matt Morrow with a TD pass to give the Indians a 6-0 lead with 9:46 left in the first quarter
.
The Tigers were able to run the ball effectively against the Indians throughout the contest, mostly with short runs up the middle, but some longer runs were successful against the Indian defense. But the Indians’ speed made up for defensive mistakes, and although Macon moved deep into Indian territory, Clark County adjusted and forced the Tigers to turn the ball over on downs.

The Indian ground game was frustrated early, but Allen’s passing was excellent, as he connected with Morrow again, this time on a 56 yard pass for a touchdown with 3:21 left in the first. The extra point kick was wide, and the Indians held a 12-0 lead.

The Indians got the ball back in the their hands right away as Macon fumbled the kickoff return, but a penalty and a bad snap leading to a sack put the Indians in a 4th down and 22 yard situation. Allen connected with Ethan Horton for what looked like another Indian TD, but the catch was ruled out of bounds, and Clark County turned the ball over on downs.

In the second quarter, the Tigers drove down to the Indian 20 yard line before Javis Vineyard pulled down an interception and returned it to the 34 yard line. But Vineyard would fumble on the next play, giving Macon the ball again.

The Indian defense stepped up to the challenge, stopping the Tigers as Kolt Kiger sacked the QB and recovered a fumble on 4th and 6 with 6:33 left in the half, giving the Indians the ball on the 37 yard line. A little under two minutes later, Kiger would catch a 20 yard pass from Allen for Clark County’s third TD of the evening. The 2 point conversion was good, and the Indians took a 20-0 lead into halftime.

Macon’s opening drive of the second half was stopped by Clark County, forcing the Tigers to punt, and Bryan Plenge returned the ball to the 29 yard line. The Indians would score again, this time on a 27 yard run by Vineyard with 6:30 on the clock in the third.
Clark County would score one more time in the game.

The Indians are now 8-0, and haven’t given up any points since the Milan season opener. They have outscored their opponents by an astonishing 360-6 points so far this season
They face Highland next week on the road, before returning home to challenge Brookfield.