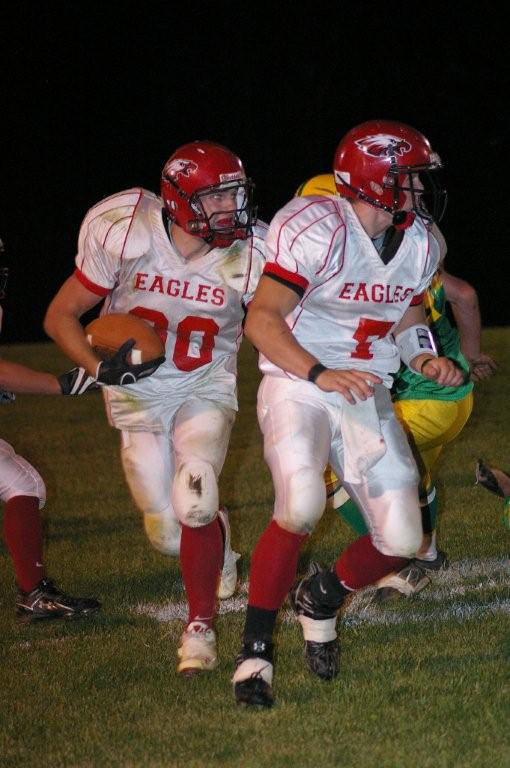 Knox County ran the football effectively and took over their first district game in the second half, posting a 37-12 varsity football victory at Scotland County.

Lucas Hudson and Keenan Gillaspy passed the 100 yard mark on the ground and scored two Knox County touchdowns each.
“We ran the ball really well,” said Knox County head coach Steve Ramer. “We got a lot of people involved in the running game. Our offensive line did a good job. We had no turnovers, which is a really big thing for us.”

“Our defense gave up a couple of long pass plays,” said Coach Ramer. “We have been vulnerable to that all year. We were able to keep Scotland County from running the football on us.”

Knox County (3-5, 3-2 in the conference, 1-0 in the district) scored their first touchdown when Lucas Hudson raced to the end zone from 24 yards out with 6:11 remaining in the first quarter. The point after try failed and Knox County led by six points.

Keenan Gillaspy passed to Dylan Morgret setting the Eagles up inside the Scotland County ten yard line. Scotland County was able to keep the Eagles out of the end zone and Cameron Kirmse drilled a 24 yard field goal with 10:27 to play in the second quarter for a 9-0 lead.
Lucas Hudson raced 32 yards for another Knox County touchdown with 4:41 to play in the first half. The conversion failed and Knox County held a 15-0 lead.

Scotland County moved their players around trying to jump start their offense. Sophomore Sabe Sears took over at quarterback with Kyle Shelley moving from quarterback to running back.

Sabe Sears connected with receiver Brandon Garnett on a 35 yard pass to the KCHS one yard line. Kyle Shelley moved back under center and ran the football in for a Tiger touchdown with 3:33 to play in the first half. Shelley hurt his knee on the play and did not return for the second half.

The two point run failed and Knox County took a 15-6 lead to halftime. Keenan Gillaspy was 2-4 for 39 first half passing yards. Lucas Hudson gained 86 yards on ten first half carries. Kyle Shelley led the Tigers with six rushes for 31 first half yards. The Eagles limited tailback Caleb Kittle to 11 first half yards.

Knox County came out and played well along the line of scrimmage in the second half. The Eagles stopped Scotland Count on downs. Andy Greenley ran the football 17 yards to the Scotland County 44 yard line.

Keenan Gillaspy raced 55 yards for a Knox County touchdown with 10:32 remaining in the game. Gillaspy passed to Tristan Lonberger for the two point conversion, stretching the KCHS lead to 31-12.
Brady Morton reeled off three good quarterback runs late in the game. The Eagles handed the football to lineman Jacob Moots, who erased a five yard penalty from the SC one with a six yard rumble for the game’s final score. Knox County led 37-12 with four minutes to play in the game.

Knox County retained the Clyde Trophy for the third straight season. Scotland County held the traveling trophy for nine consecutive years.
Knox County rushed 43 times for 365 yards. Keenan Gillaspy went 5-9 in the passing category for 51 yards. The Eagles racked up 16 first downs and 406 total yards from scrimmage. Scotland County stats were not available at press time. The Eagles held their hosts to six unofficial first downs on the night.

David Hinkle had a fourth quarter sack on fourth down and 11 giving the football back to the Eagles. Knox County has not turned the football over in three games, winning all three contests.
Knox County will put a chance for a district title on the line when they host a very good North Shelby football team on October 24. The contest is Knox County’s Senior Night and is the Eagles’ final regular season home game.

Nationally recognized fitness guru Terry Ahern coaches the Raiders (5-3) and has the Raider team in great condition. Knox County will not be able to wear down the North Shelby line the way they have other opponents and beat them in the second half.

The Raiders have good team speed and feature a balanced attack. North Shelby has been ranked in area power polls all year.
“We will have to limit their ground game,” said KCHS coach Steve Ramer of the much anticipated contest. “We cannot turn the football over if we expect to win. North Shelby is a great team. We are going to have to face great teams if we want to make a run through the playoffs.”