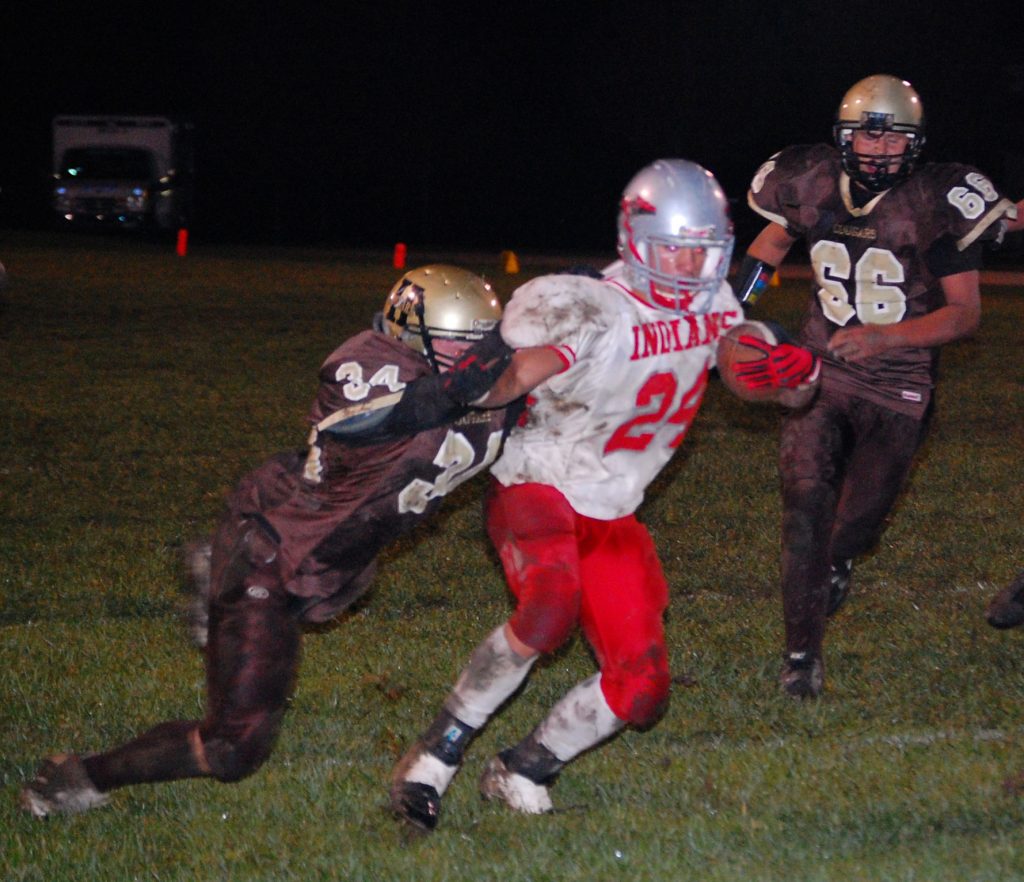 The Clark County Indians took their undefeated record into the second district game on Friday night, this time traveling to Highland to take on the 2-6 Cougars.

Highland got the ball first, but was forced to punt a little over a minute into the game as the Indian defense shut down the Cougar drive.

Clark County’s first possession of the game lasted only one play, as Ethan Allen threw an interception, and the Cougars took over again.

Highland’s next drive stalled again, and the Cougars punted the ball away, and the Javis Vineyard fielded the punt midfield, and returned 20 yards to the Highland 31. From there, Vineyard scored his first touchdown of the evening, with 8:14 left in the first quarter. Kolt Kiger’s extra point kick was good, and Clark County had a 7-0 lead.

Clark County got the ball back again after the Cougar fumbled the kickoff return, and the Indians drove into the end zone again, this time on a two yard run by Vineyard with 5:27 on the clock. The extra-point kick missed, and the Indians led 13-0.

The Indians would get the ball back again in the first quarter, but that drive stalled, forcing the Indians to punt.

Highland started the second quarter with the ball on their own 23, but had to punt after a 3rd and five pass failed. With 10:26 left in the half, Clark County got the ball again on the 22-yard line, and drove 78 yards for the touchdown. Vineyard scored his third TD of the night with an 8-yard run. The kick missed, and the Indians led 19-0 with 8:22 on the clock.

Highland’s offense could not sustain a drive against the Indians, and the Cougars punted the ball again, and after a good return, the Indians started their possession near midfield. With 5:37 left in the half, Vineyard scored his fourth touchdown, to give the Indians a 26-0 lead.

Highland’s bad luck continued, as a Cougar was hit in the back by the kickoff, giving the ball back to the Indians on the Highland 40. The Indians put more points on the board, capped by Bryan Plenge making a two yard TD catch to give the Indians a 32-0 lead.

Plenge would end Highland’s next drive with an interception, and Clark County scored again in the first half, this time with Plenge catching a 22-yard TD pass. A two-point conversion attempt failed, and Clark County had a 38-0 lead with 1:28 left in the half.

Coach Matt Smith challenged his team to get ball back before halftime, and they rose to the challenge, getting the ball back with exactly one minute left as Matt Morrow pulled down an interception.

The Indian’s possession didn’t last long, however, as a deflected pass was caught by Highland on the Indian 35 yard line.
As the final seconds of the half wound down, Highland had two attempts to do what no other team has done since the first game of the season–score on the Indians. The Cougars had two incomplete passes in the end zone before time ran out.

With a running clock in the second half, the Indians added one more touchdown on the evening. Plenge caught his third TD pass from Allen on the night, this time a 19 yard catch with 5:24 left in the third quarter, to give the Indians their 44-0 win.

The Indians had 381 total yards of offense on the evening, including 234 rushing and 147 passing.  Vineyard had 179 yards and four touchdowns.

The Indians will take on Brookfield at home on THURSDAY night, October 30, in a game, which will decide the Tri River Conference championship. Brookfield fell to Macon Friday night.