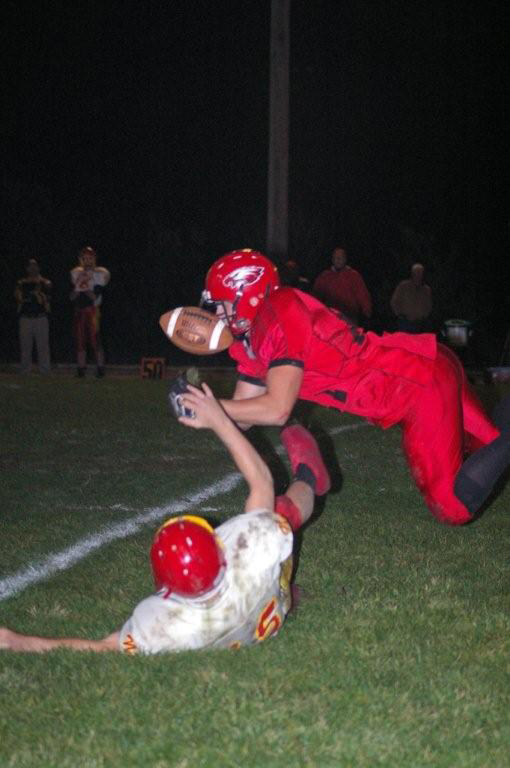 North Shelby won the battle of the trenches and rode a pair of second half interceptions to a 20-12 district 16 football win at Knox County. Alex Thrasher picked off a Keenan Gillaspy pass, snapping the Eagles’ seven half turnover free streak.

A pair of second half Raider touchdowns helped snap Knox County’s three game winning streak and ended the Eagles’ district title aspirations. Knox County’s failure to convert on either of their two first half touchdowns changed the complexion of the contest.
Both sides competed to the last play of a closely held, rain dampened contest. The Ella Campbell Field held up well but slick conditions prevailed. The Raiders (6-3, 4-2 in the conference, 2-0 in District 16) ran the football effectively most of the game. North Shelby was able to prevent Knox County from establishing their ground game.

“The game comes down to making big plays,” said Coach Ramer. “We missed wide open receivers in the second half. Little things here and there. They beat us. We had first and goal from the (North Shelby) nine and got a holding penalty. From the spot of the foul, that put us back to the 21. That was just out of our field goal kicker’s range.”

Both teams played well defensively. Knox County stopped the Raiders on downs at the NS 46 yard line on the game’s opening series. North Shelby forced six punts on the night by unofficial count.
Ben Harder recovered the first of two North Shelby fumbles on the Knox County 48 yard line in the opening quarter. The stingy Raider defense forced another punt. Knox County returned the favor setting up the Eagles on their 34 yard line.

Knox County made good use of the play action pass throughout the contest. Keenan Gillaspy found Matthew McCarty streaking down the field for a 46 yard gain.

Lucas Hudson helped turn a fourth down and ten gamble into six points with a pin point half back option pass to Cameron Kirmse with 53 seconds remaining in the first quarter. The 27 yard scoring strike put Knox County on the board with a 6-0 lead.

A high snap on the point after kick ended with the holder throwing and incomplete pass. North Shelby responded with a 66 yard touchdown drive of their own on the next possession following the Eagle touchdown.

The Raiders ran sweeps from their shotgun spread package for good gains. Daniel Jones scored the first of his two touchdowns with a three yard scamper at the 8:44 mark of the second quarter. Jesse Christopher kicked the extra point for a 7-6 North Shelby lead.

Knox County could not move the football on their next series. North Shelby got a hand on the punt and gained possession on the KCHS 31 yard line. Knox County was able to stop a fourth down and one quarterback sneak with 4:56 remaining in the second period.

The Eagles regained possession on their 35 yard line. North Shelby was getting the better of line play and forced another punt. Keenan Gillaspy sailed the football to the North Shelby 28 yard line.
Ben Harder fell on another North Shelby fumble on the Raider 35 yard line with 90 seconds remaining in the first half. It did not take the Eagles long to regain the lead.

Keenan Gillaspy found Tristan Lonberger with a play action pass for a 35 yard touchdown pass with 1; 23 showing on the second quarter clock. The two point conversion pass failed and the Eagles led 12-7.
Knox County was able to force a Raider punt, giving the Eagles possession on the Eagle 41 yard line with 32 seconds to play until intermission. Knox County moved the football inside the Raider 30 yard line but time ran out on the 12-7 KCHS halftime lead.

North Shelby rushed 25 times for 119 yards according to unofficial halftime stats. Knox County was held to nine tries for 20 yards on the ground. The Eagles held a 130-0 yard advantage in the air for a 159-119 total yard from scrimmage edge after two quarters of play.
North Shelby had a 7-5 lead in first downs through two quarters of action. Linebacker Ben Harder had both first half turnovers. The defensive struggle continued early in the third quarter.

Tristan Lonberger drew a pass interference penalty around the Raider 40 yard line. Jacob Moots had a nice open field tackle that set up a punting situation for North Shelby. The first four offensive drives of the second half resulted in punts.

Alex Thrasher picked off a Knox County pass around his 20 yard line. Thrasher returned pick to the Knox County 35 yard line.
North Shelby quarterback Ryan Henderson found Josh McEwen for an 18 yard pass play. Daniel Jones capped the three play short field drive with a 12 yard touchdown run at the 2:59 mark of the third quarter. North Shelby was assessed a penalty on the extra point try.
The penalty backed the Raiders up five yards. Knox County surged through the line and blocked the kick. Knox County’s inability to convert their PAT chances now came back to haunt the home team. North Shelby led by a 13-12 margin. The difference on the board was the Raider extra point.

Knox County took the ball on their 28 yard line. The Eagles drove the football down the field. Keenan Gillaspy passed to Cameron Kirmse for a 25 yard gain. A face masking penalty gave Knox County a first down during the drive. The Eagles moved the football to the North Shelby 36 yard line with 9:48 to play in the game.
The Eagles eventually drove the ball to the Raider 15 with 7:42 to play in the fourth quarter trailing by a point. Lucas Hudson ran the football to the North Shelby nine yard line. A holding penalty moved the ball back to the NS 25 and took away a first and goal opportunity.

Knox County eventually faced a fourth down and seven yards to go challenge around the Raider 20 yard line. Cameron Kirmse played the game with a sprained ankle, limiting the Eagles field goal range. The fourth down pass to Dennis Dent fell incomplete on the Raider five yard line.

“On a dry night with a solid field we would have had a shot at the field goal,” said Coach Ramer. “A 32 yarder was pushing (Cameron Kirmse) with a sprained ankle. Having the ball on the eight yard line was definitely in field goal range.”

“The first half was an ugly half for us,” said North Shelby coach Terry Ahern. “We turned the football over. I think we were a little nervous tonight. We couldn’t handle the wet field very well.”

“I challenged (the Raiders) in the second half,” said Coach Ahern. “We had to come back and shut them down in the second half and that’s what we did. We were closely matched in a very close game. This was one of the best games I have coached in this year because of the rivalry and closeness of our records.”

“We have been struggling against the big play this season,” said Ahern. “If you check the season stats, we are very good against the run. When somebody passes against us that is our down fall. In the second half, our defensive backs stayed back I would rather come back and finish strong in the second half than let them come back like they did last year.”

Knox County won by a 22-21 score at North Shelby last season in a game that went down to the final play. Ethan Hustead blocked a field goal with eight seconds showing on the clock to preserve the victory.
“It was our turn to come back this year. I think they remembered what it felt like to have a team come back and beat you,” said Coach Ahern. “They wanted to return the favor, and that’s exactly what they did,” related Terry Ahern of the 2008 Raider effort..

The Raiders clung to their one point lead. Ryan Henderson scrambled 22 yards to the Eagle 25 yard line. Knox County’s coaching staff elected the bold move of allowing North Shelby to score. Josh McEwen dashed 25 yards to pay dirt with 2:54 to play in the game.
Jesse Christopher kicked the extra point for a 20-12 lead. The Eagles could tie the game and force overtime with a touchdown and two point conversion. Knox County had one timeout remaining.

“We let them score the touchdown at the end,” said Steve Ramer. “I think our defense would have held them if we had the lead. There were three minutes left. They get one first down and they kill the clock. Even if they don’t, they only leave us 50 seconds or so to play with. We just couldn’t let them have the two point conversion.”
“That gave us a chance to go down and tie,” said Ramer. “That was about the only shot we had.”

Knox County took the football with 2:47 to play in the game on their 35 yard line. North Shelby played good pass defense. The Eagles recovered a fumble after Nolan Otto sacked the KCHS quarterback.
A fourth down and 17 pass fell incomplete and North Shelby took over on downs with a minute to play on the Eagle 18 yard line. North Shelby ran out the remaining time and claimed the hard fought 20-12 victory.

“This was a tough contest,” said Terry Ahern. “It was a tale of two halves. Better play for Knox County in the first half and better play for North Shelby in the second half.”

Defensive stats were provided by North Shelby and Knox County and are official. “It came down to we couldn’t make the big play in the second half,” said Steve Ramer. “We just didn’t seem to have a rhythm at all in the second half.”

“We have got to refocus next week. We should feel miserable this weekend. We had our chance and just didn’t get it done,” said Ramer. “We have to wipe this out of our minds Monday. We have another shot at a big game. We have to go to Schuyler County and win. You have to make big plays in a big game.”

The Halloween Night regular season finale at Schuyler County will determine the second and final playoff slot in District 16. Schuyler County is an improved team. The 1-8 Rams will be hungry for a win and a chance at season redemption.

Even in that extremely unlikely scenario, North Shelby would win the district championship by head to head tie breaker so the Raiders are the 2008 Class 1 District 16 champion.

Princeton and Marceline will play for their district championship this week. The winner of the Knox at Schuyler County game will play at the District 15 winner on Wednesday, November 5 in the first round of the MSHSAA football playoffs. North Shelby will host the loser of the Princeton vs. Marceline match up the same evening.