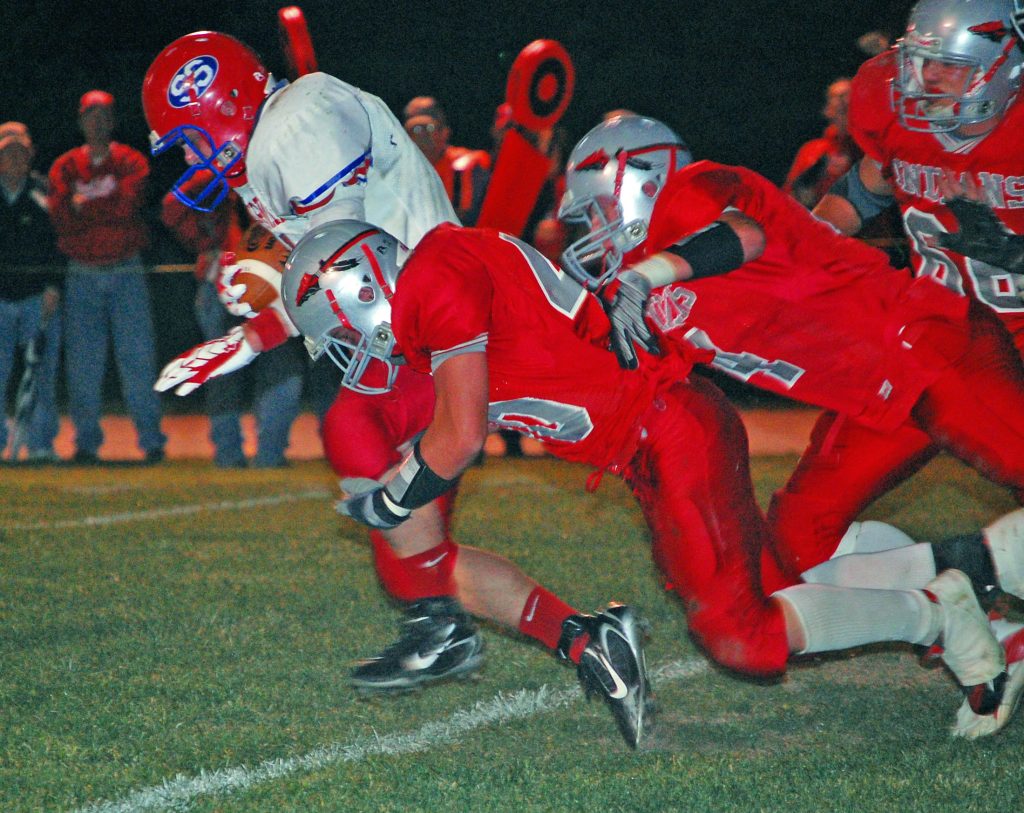 The Clark County Indians survived an early scare from the South Shelby Cardinals in Wednesday night’s regional playoff action, held at the CCR-1 Activity Field. The Cardinals came into the contest with an 8-2 record, facing the Number 3 ranked Indians with a 10-0 record.

The Cardinals won the coin toss, and received the ball to start the game. South Shelby returned the kickoff to the 36-yard line, and from there started working on what would become a 19-play, 64-yard scoring drive lasting over 10 minutes. With just 1:47 left in the first quarter, Stefan Andress put the ball in the end zone for the Cardinals, and Clark County found themselves behind for the first time all season, 7-0.

The Indians didn’t get much going on their first possession, as the Cardinals seemed to have the momentum. Clark County was forced to punt the ball, and the Cardinals started their next possession on the 3-yard line with 11:38 on the clock in the second quarter.

The Cardinals looked like they were going to repeat their first possession with a methodical drive up field, but the Indian defense stopped them at their own 21-yard line, forcing a punt.

Javis Vineyard got the Indians right back into the game with a 58 yard touchdown return with 8:11 on the clock. Kolt Kiger’s kick was on the mark, and the game was tied at 7-7.

South Shelby started their next possession on their own 15, after a penalty pushed them back. The Cardinals used Andress’ running to move the ball to midfield before the Indian defense stopped them, forcing another punt.

Clark County got the ball on the 3-yard line with 4:52 left in the half, and drove out to the 40 before stalling. The punt got up in the stiff breeze, and South Shelby took over on the 48-yard line with just under two minutes to play in the half.

The Indian would get the ball again with less than a minute left, but the halftime score would remain 7-7.

Clark County got the ball to start the second half, and wasted little time setting a new direction for the game. After fielding the kickoff on the 10-yard line, Vineyard dashed to the 39 before the Cardinals brought him down. The Indians drove across midfield before Ethan Allen connected with Ethan Horton on a 44-yard touchdown pass with 11:03 left in the third period. Kiger’s kick was good again, and Clark County led 14-7.

South Shelby would start their next drive on their own 33. After patiently moving the ball a few yards at a time, Andress broke free and raced deep into Indian territory before Allen dragged him down from behind, saving a TD, but giving the Cardinals a first down on the Indian 6-yard line. Clark County’s defense was fired up, and the Indians denied the Cardinal the end zone, and took over on downs on the 1-yard line with 4:45 left in the third quarter.
A Vineyard run gave the Indians a little breathing room, but they were still deep in their own territory when Allen connected with Mason Owen on a fifty-plus yard pass. After a facemask penalty was tacked on, the Indians had the ball on the Cardinal 32.

Ethan Allen rushed 30 yard to the South Shelby 2-yard line for an Indian first down. Clark County was pushed back, but would not be denied, as Vineyard capped the 99 yard drive with a 7 yard touchdown run, and the Indians took a 20-7 lead with 2:47 left in the quarter.

On the kickoff, South Shelby threatened to break free before being stopped at the 50 yard line. The Indian defense had all the momentum, and pushed the Cardinals back, where they attempted a fake punt in a 4th and 17 situation. The pass was incomplete, and Clark County took over the ball on the 44-yard line to star the fourth quarter.

This time, the Indians couldn’t move the ball, and were forced to punt. Bryan Plenge’s punt was perfect, rolling to a stop at the Cardinal 1 yard line. Again, the Indian defense kept the Cardinals from getting any momentum, and forced a punt, which Vineyard returned to the 20-yard line. After a couple incomplete pass attempts and a fumble, the Indians turned the ball over on downs at the 22-yard line with 6:23 left in the game.

Cardinal quarterback Matt Patterson didn’t make many mistakes Wednesday night, but he was chased out of the pocket and tried to throw a screen pass over Lynn Williams. Plenge saw the play develop and picked off the pass, racing 41 yards for a defensive TD. Kiger’s kick was good, and the Indians led 27-7 with 4:20 remaining in the game.

The Cardinals’ chances for a comeback were shattered as Vineyard picked off another Patterson pass. The Indians then moved the ball into South Shelby territory before taking a knee on the final play of the game.

Coach Matt Smith had nothing but praise for Rob Wilt’s Cardinal team.

The Indians advance to a sectional matchup against Brookfield, which will be held Monday, November 10, at Kahoka. Brookfield placed second in the district behind Clark County.  Macon, Highland and Brookfield had identical 1-2 records in district, but the tie-breakers worked to Brookfield’s favor, keeping them alive.  The Bulldogs downed Monroe City 34-19.