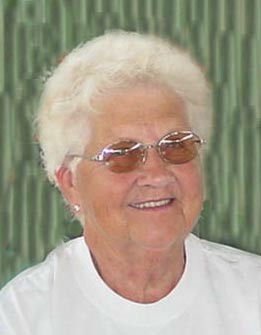 Edna Belle Mullenix, age 84 of Edina, Missouri, died Wednesday, November 6, 2008, in Edina, Missouri.
She was born November 24, 1923, at McCloud, Oklahoma, the daughter of John Marshall and Edna Esther Dayringer Mansfield.
She was united in marriage to Lee W. Mullenix on October 5, 1941, at Kansas City, Missouri and he preceded her in death on July 2, 1976.
Also preceding her in death were her mother and stepfather, three sisters, one brother, two grandchildren and one great-grandchild.
Surviving are six children, Ellen Perrigo and husband, Dwain of Edina, Missouri, Jim Mullenix and wife, Pat of Lewistown, Missouri, Bill Mullenix and wife, Gerri of Kingman, Arizona, Donna Rice of Ashland, Missouri, Richard Mullenix and wife, Susan of LaBelle, Missouri, Steve Mullenix of Williamsburg, South Carolina, twelve grandchildren, fourteen great grandchildren and one great-great grandson.
Mrs. Mullenix received her education in Kansas City, Missouri; she was a housewife and homemaker. She and her husband farmed near Steffenville, Missouri from 1944 till 1962. She and her husband built Lake of the Oaks at St. Patrick, Missouri and in 1970 she and her husband moved to Youngtown, Arizona. In the early 1980’s she moved to Edina, Missouri.
Edna Belle was a Christian mother to her six children and they were her life. She worked several years for DeRosears Flowers & Gifts and loved God’s beautiful creation of flowers and plants. She was a member of the Mt. Pleasant Baptist Church at Steffenville, Missouri.
Funeral services were held at 2 p.m. Sunday, November 9, 2008, at the Hudson-Rimer Funeral Home in Edina, Missouri. The Reverend Charles Sharpe officiated the services. Burial was in the Newark Cemetery.
Expressions of sympathy in memory of Edna Belle Mullenix may be made to Northeast Missouri Hospice. Memorials may be left at or mailed to Hudson-Rimer Funeral Home, P.O. Box 1, Edina, Missouri, 63537.