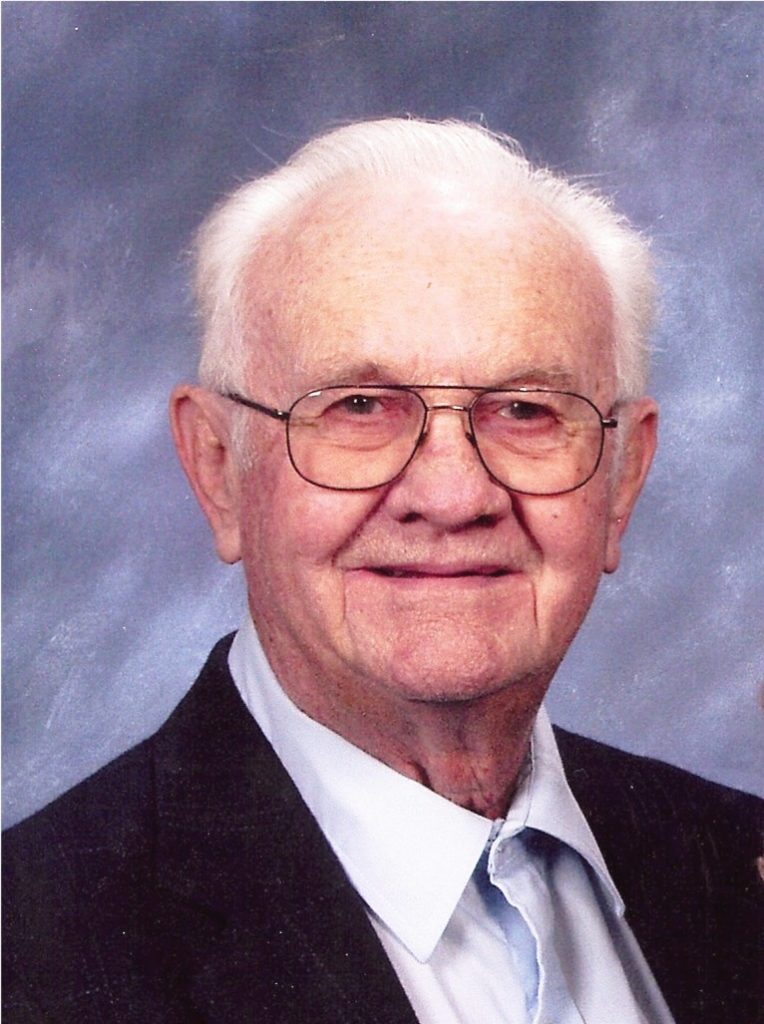 Raymond Cecil Hall, age 88, of Edina, Missouri, died Sunday, November 9, 2008, at the Knox County Nursing Home.
He was born December 28, 1919, in Knox County, Missouri, the son of Ralph Randolph and Josephine Mae (Hannah) Hall.
On May 31, 1941, in Brashear, Missouri he was united in marriage to Birdie Marguerite Long and they were married for sixty-seven years.
Surviving are his wife Birdie Hall of Edina, Missouri, one son Duane Randolph Hall of Edina, Missouri, one brother-in-law Lawrence Dixson of Hurdland, Missouri, and several nieces, nephews and cousins.
Raymond was preceded in death by his parents, aunts and uncles, numerous cousins and his father and mother-in-law Breece and Elva Long.
Raymond graduated from the Van Horn Country School and attended Hurdland High School.
Raymond was engaged in farming south of Hurdland, Missouri all his life until he retired in 1984 after being a senior partner with his son Duane.
Raymond was a hardworking, talented man and a master of all trades. He enjoyed every challenge as an engineer, mechanic, electrician, plumber, carpenter, welder and businessman. He incorporated his ability into his operation very well. He expected hard work from everyone but was fair.
He owned an airplane and was past president of the Missouri Flying Farmers and a delegate of the International Convention.
He served three years on the county FmHA board, was past Noble Grand of the Hurdland I.O.O.F. Lodge, a 4-H leader for 10 years and a member of the Edina United Methodist Church.
He received the county Farm Management Award from the University of Missouri once and received the Knox County Soil and Water Conservation District Farmer Award three times. He enjoyed reading, working on projects in his workshop, watching game shows, history programs and spending time with his family and friends.
Funeral services will be held 11 a.m. Friday, November 14, 2008, at the Hudson-Rimer Funeral Home in Edina, Missouri. Officiating the services will be Reverend Beryl Cragg and Reverend Sam Smith.
Visitation will be 6 to 8 Thursday evening November 13, 2008, at the Hudson-Rimer Funeral Home in Edina, Missouri.
Expressions of sympathy in memory of Raymond C. Hall may be made to Edina United Methodist Church or the Hurdland I.O.O.F. Cemetery. Memorials may be left at or mailed to Hudson-Rimer Funeral Home, P.O. Box 1, Edina, Missouri, 63537.