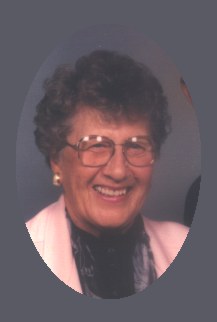 She was born July 11, 1914, in Keokuk, IA, a daughter of Chester and Elizabeth Deiling Trimble.

She married Russell Bullerd on October 22, 1938, at her parent’s home in Keokuk. This past month they celebrated their 70th year of marriage.

She was preceded in death by her parents; two sisters, Edith Wright of Alexandria and one in infancy; and a brother, Allen Trimble of Keokuk.

Dorothy graduated from Keokuk High School. She was a supervisor in the production department at the former S.F. Baker Medicine Co. in Keokuk and former part-time rural mail carrier for Alexandria.
She was an active member of the Alexandria Presbyterian Church. She was a talented artist who enjoyed calligraphic writing and oil and watercolor painting. She also used her artistic touch in growing flowers, doing handiwork and quilting. Her family was her richest blessing.

Visitation was held at Wilson Funeral Home Thursday between the hours of 9 and 5 and after 9 a.m. Friday with family receiving friends from 1 p.m. until time of services.

Memorials were suggested to Hancock Co. Hospice.
On-line condolences may be expressed at www.timeformemory.com/wilsonfh.