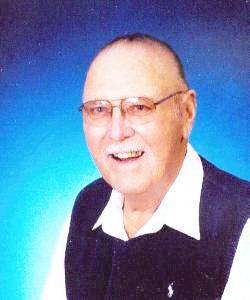 James L. Binkley, 82, of Fort Madison, IA, died on Thursday, November 13, 2008 at 3:46 p.m. at Mercy Hospital in Iowa City, IA.
He was born on October 1, 1926 in Knox City, MO to Lloyd & Cora Russie Jones Binkley. He married Patricia Dawn Davis in 1951 in Quincy, IL. She died in 1969. He then married Mary Spiekermeier on December 4, 1971 at St. Joseph’s Church in Fort Madison, IA.
He was a truck driver for 40 years and retired from Yellow Freight. He was a member of Sacred Heart Church, the Eagles Club, Moose Club and was a lifetime member of the V.F.W. He served in the U.S. Army during WWII in the Quartermasters Division and was stationed in Italy. He was the lead singer and guitarist in the Big River Bluegrass Band and was an avid golfer, quail hunter and fisherman.
Jim is survived by: his wife, Mary Binkley of Fort Madison, IA; a special friend of 27 years, Norma Poland of Fort Madison, IA; one son, Mace (Lynn) Binkley of Fort Madison, IA; two daughters, Colette (Dennis) Evans of Cedar Rapids, IA and Tammy (Tom) Kokjohn of San Diego, CA; four grandchildren; one step-grandson; three great-grandchildren; two sisters, Mabel (James) Florea of St. Louis, MO and Doris “Peggy” Hayes of Fort Madison, IA. He was preceded in death by: his parents, first wife, Patricia, one son in infancy, Clayton James Binkley, one brother and one sister.
Visitation was from 1:00 p.m. on Sunday, November 16, 2008 with the family to meet with friends from 3:00 to 5:00 p.m. at King-Lynk Funeral Home & Crematory. The celebration of life service was at 10:30 a.m. on Monday, November 17, 2008 at King-Lynk Funeral Home & Crematory with David Poland officiating. Burial was at Oakland Cemetery with military rites performed by the Fort Madison Veterans Honor Guard.
A memorial has been established and contributions may be left at King-Lynk Funeral Home & Crematory. Online condolences may be left for the family at the King-Lynk Funeral Home & Crematory website: www.kinglynk.com