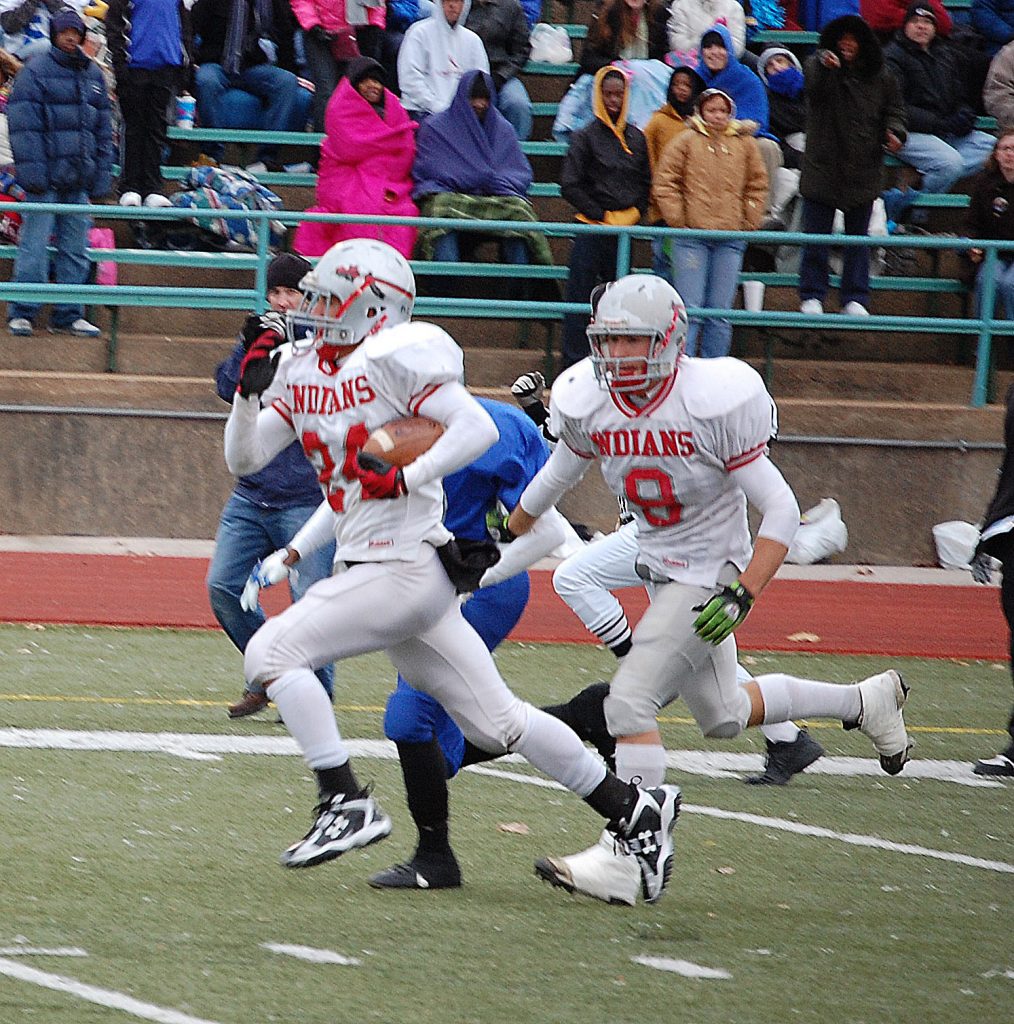 The Clark County Indians are headed to the dome.

After several weeks of playing ball in the cold, Clark County is headed to the Missouri Show-Me Bowl Class 2 State Championship game next Saturday inside the Edward D. Jones Dome in St. Louis. Their opponent will be the Maryville Spoofhounds. The game will start at noon.

On Saturday, November 22, the Indians traveled to Mehlville High School in St. Louis to take on the top-ranked Maplewood-Richmond Heights Blue Devils in their first-ever appearance at a state-semifinal matchup. Crowds of Big Red supporters packed the stadium, outnumbering the Blue Devil fans by a 3-1 margin, by some estimates.

Clark County got their hands on the ball first in the contest, but the possession quickly turned sour for the Indians as an Ethan Allen pass was tipped up and picked off by MRH’s Bryant Allen, who returned the ball to the Indian six yard line.

The Indian defense wasn’t intimidated by the much-touted Blue Devil speed, and on their first play, MRH quarterback Les Williams was slammed by Michael Brennan and Lynn Williams, forcing a fumble that Nathan Alderton covered at the five-yard line.

The Indians worked for a little maneuvering room before having to punt the possession away, where MRH started with great field position. The Blue Devils drove to the 26 yard line before the Indian D stopped them, as a 4th and four pass fell incomplete, and the Indians took over on downs.

Clark County worked their way to the 38 before Javis Vineyard exploded through the line with a 62-yard touchdown run, giving the Indians the lead. Kolt Kiger’s kick split the uprights, and the Indians led 7-0 with 5:37 on the clock in the first quarter.

The Blue Devils next possession was short-lived, and Matt Morrow picked off a pass, giving the Indians the ball on the 48, but Ethan Allen couldn’t find his passing groove, and the Clark County punted the ball away.

MRH moved the ball a little, but were quickly forced to punt the ball away. MRH got a huge break, however, when Javis Vineyard fumbled the punt, giving the Blue Devils possession on the 24. The Devils gained a first down before Bryant Allen scampered into the end zone for a 14-yard touchdown with 8:59 left in the half. Their two-point conversion failed, and Clark County held a slim 7-6 lead.

Momentum had shifted away from the Indians, and again they had to punt the ball away. MRH’s big receiver, 6-5 Charles Brooks, took a pass all the way to the Indian five yard line, where the Devils threatened to score again they lost another fumble, this time recovered by Lynn Williams on the two yard line.

The Indians worked the ball out to the 28 yard line before Ethan Allen was sacked, forcing a fourth and seven punt. Bryan Plenge boomed the punt all the way to the MRH 23, and the Blue Devils started their drive. The Devils demonstrated their speed and agility, working the ball upfield and scoring again with 55.8 seconds left in the half. This time, their two-point attempt was good, and MRH led Clark County 14-7.
MHR tried an onside kick, but Lynn Williams caught the ball on the run and rumbled to the 39. The Indians needed to move the ball 61 yards in less than a minute, and that’s exactly what they did. Ethan Allen found his passing groove, a mixed his receivers to keep the Devils guessing. Matt Morrow came up with a big tipped-ball reception, Ethan Horton caught an important first down pass, and with just six-tenths of a second left, Allen connected with Mason Owen in the corner of the end zone, and at halftime, the Indians trailed 14-13.

The second half would be all Clark County, as the Indians came out of the lock rooms fired up and denied the Devils a first-down on their first possession, forcing them to punt.
Byran Plenge fielded the bouncing punt, and the Indians started their march on their own 35-yard line.

Ethan Allen made a good first-down run to midfield, then connected on a pass to Mason Owen on the 32-yard line. From there, Allen took the ball into the end zone to give the Indians the go-ahead touchdown. Clark County’s two-point attempt failed, but the Indians had a 19-14 lead and the game’s momentum with 8:03 left in the quarter.

MRH’s quickness was no match for the Indians’ spirit, and the next Blue Devil possession ended in a shanked punt that only traveled 11 yards, giving Clark County the ball on the MRH 35 yard line.

Ethan Allen was fighting leg cramps, and Ryan Whiston and Javis Vineyard took a few snaps in his place. Vineyard got a good run to the MRH three-yard line before pounding into the end zone on the next carry. Another two-point conversion failed, but the Indians’ lead grew to 25-14 with 3:15 left in the quarter.

MRH’s luck got worse, as Vineyard pulled down an interception to take any wind out of the Blue Devils’ sails. The Indians couldn’t score on the possession, but burned three minutes off the clock before Plenge pounded another punt that rolled out of bounds on the MRH eight yard line.

The Devils moved the ball, getting a first down on the 21 yard line before Ethan Horton picked off a pass and returned it to the MRH three-yard line. Vineyard took it in, and Kolt Kiger’s kick was good. Clark County’s lead was 31-14 with 9:41 left in the game.

Yet another Blue Devil fumble would give the Indians possession, but a penalty called back another Vineyard run into the end zone, and the Indians would turn the ball over on downs.

MRH got pushed backwards by the Indians, and with 3:57 left in the game, reached into their bag of tricks. With fourth down and five, Bryant Allen tossed the ball forward instead of punting, but a very alert Bryan Plenge caught the ball in the air and raced to the MRH five-yard line. Vineyard took the ball to the one, where Kolt Kiger would score with 3:16 left in the game. Kiger added the extra point, and Clark County would advance to the state championship game with an impressive 39-14 win over previously unbeaten MRH.

Watch for updates to this story as the school announces pep rally and send off plans.