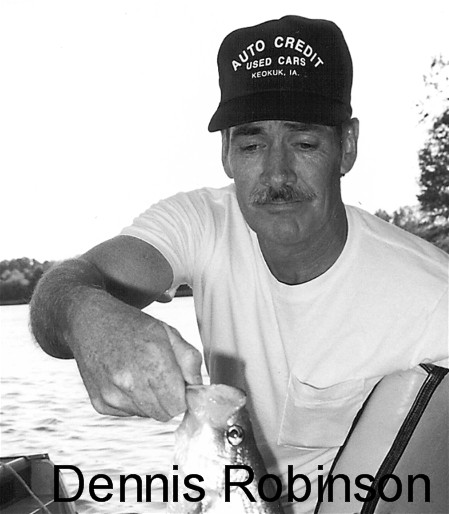 He was born in Keokuk, IA on March 23, 1949 the son of Ward B. and Edna Mae Smith Robinson. When Dennis was about 2 years old, the family moved near Memphis, MO.

He attended Memphis grade school and Memphis Junior and Senior High School. He graduated in 1967.

He married Cheryl Riebel in April of 1967 in Memphis, MO and to this union two children were born. They divorced in 1984.
He married Janice Margaret Newberry Steffen on September 7, 1991 in the First Christian Church in Keokuk, IA.

Preceding him in death were his parents, a nephew, Casey Baker and one brother-in-law Phillip Baker.

Dennis was the owner of Auto Credit in Keokuk. In his early years Dennis farmed with his father and various others in the Memphis, MO area.

Dennis loved to hunt and fish. He hunted elk many times in Colorado and loved to go to Ontario, Canada to fish. On one of his trips to Canada, he also killed a black bear. He enjoyed the outdoors very much and was happiest in the woods or on the water, and at his cabin in Arbela, MO.

A celebration of life service will be held at 2 p.m. Tuesday at the Vigen Memorial Home in Keokuk, IA with Rev. Bill Mitchell officiating. Burial will be in the Wyaconda Cemetery, Wyaconda, MO.

Visitation will be after 1 p.m. Monday with family meeting with friends from 6-8 p.m. at the Vigen Memorial Home in Keokuk, IA
Memorials may be made to the donor’s choice.