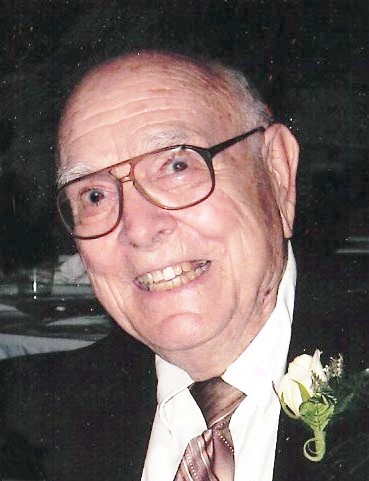 William (Bill) Clement Frazee, age 85, of Smithton, Missouri, formerly of Knox County, Missouri, died Monday, December 8, 2008, in Sedalia, Missouri.
He was born December 21, 1922, in rural Edina, MO., the 3rd of 4 children. His parents were Virgil Norris and Vida Ruth (Oldfather) Frazee who preceded him in death. William was also preceded in death by two sisters, Marjorie Hunolt and Dorothy Heinberg.
Bill was united in marriage to Mary Lucille Kirschner on June 7, 1947 at Bee Ridge Methodist Church.
Surviving are his wife Lucille Frazee of Smithton, Missouri, six children, Linda Page and husband Dan of Smithton, Missouri, Marie Hern and husband Kyle of Kansas City, Missouri, Bill Frazee Jr. and wife Sharon of Fulton, Missouri, Barbara Trump and husband Jerry of Rolla, Missouri, Judy Schmidt and husband Leroy of Greenwood, Missouri, and John Frazee and wife Holly of Smithton, Missouri; one brother, Jim Frazee and wife Ginny of Ankeny, Iowa; fifteen grandchildren, Sara Stevens and husband TJ, Brad Page and wife Callie, Emily Curtis and husband, Michael, Nathan Horak-Hern and wife Melissa, Lindy Hern, Jonathan Hern, Elise Bartley and husband Tucker, Eric Frazee, Felicia Trump, Elizabeth Schmidt, Rebekah Schmidt, Leah Schmidt, Aaron Frazee, Andrew Frazee, Caitlin Frazee, five great-grandchildren, Lily Stevens, Ellie, Ava, and Claire Marie Page, Preston Perrymore, two step-grandchildren, two step-great grandchildren, several nieces, nephews, great nieces, great nephews, great great nieces, and great great nephews.
He was a member of Bee Ridge and Edina United Methodist Churches, Knox City American Legion Post #358 where he was chaplain for many years, Missouri State Teachers Association, United Methodist Men, and the Walk to Emmaus Reunion Group.
Bill attended Pleasant Valley School and graduated from Edina High School. He then served his country in World War II, from Jan. 20, 1943 – Dec. 6, 1945, primarily being stationed at Hickam Field in Honolulu, Hawaii. After returning from the war, he earned an undergraduate degree from the University of Missouri in Columbia in 1950. Later, he earned his Masters degree from Missouri Teachers College in Kirksville, Missouri (Truman State University).
He taught Vocational Agriculture, Science, and Math for 35 years in Macon and Memphis, Missouri, and at Edina High School and finally at Knox County High School. During this time, he taught well over 3000 students.
Bill was known as an active member and supporter of his church, serving in many ways. His passion was mission work, including participation in multiple Volunteers in Mission projects and continual prayer and support for projects throughout the world. He was on the first team the United Methodist Churches in Missouri sent to the country of Mozambique in Africa in 1990. This began a relationship between the churches of these two cultures that has continued to grow stronger and more effective to this day. He was a Certified Lay Speaker, sharing the story of Mozambique and mission efforts to dozens and dozens of churches across the state of Missouri.
Amongst other responsibilities and accomplishments, he served on the Board for Wider Opportunities of Lewis County and was a member of the committee that directed the union of the two conferences of the United Methodist Church in Missouri.
Bill was an avid sports fan, especially the St. Louis Cardinals and Missouri Tigers. He greatly appreciated and loved participating in regular Bible studies. His greatest joy was being with family and he especially enjoyed his grandchildren.
Bill and his wife, Lucille, owned and operated a farm southeast of Edina for 53 years where they raised their six kids and registered Shorthorn cattle before moving to Smithton, Missouri in March of 2008.
He was a greatly admired and revered man. His compassion, gentleness, humility, graciousness, and kindness will be missed by many.
Funeral services were held Friday, December 12, 2008, at the Edina United Methodist Church. Officiating the services was Reverend Kyle Hern and Reverend Sam Smith. Burial was in the Bee Ridge Cemetery southeast of Edina, Missouri.
In the spirit of his passion for mission and always looking to others, the family on his behalf requests no flowers. In lieu of flowers, memorials may be made to the Edina United Methodist Church, or to the Mozambique Initiative, in care of your local United Methodist Church or by sending to the Hudson – Rimer Funeral Home, P.O. Box 1, Edina, MO 63537.
Condolences may be emailed to hrimer@marktwain.net