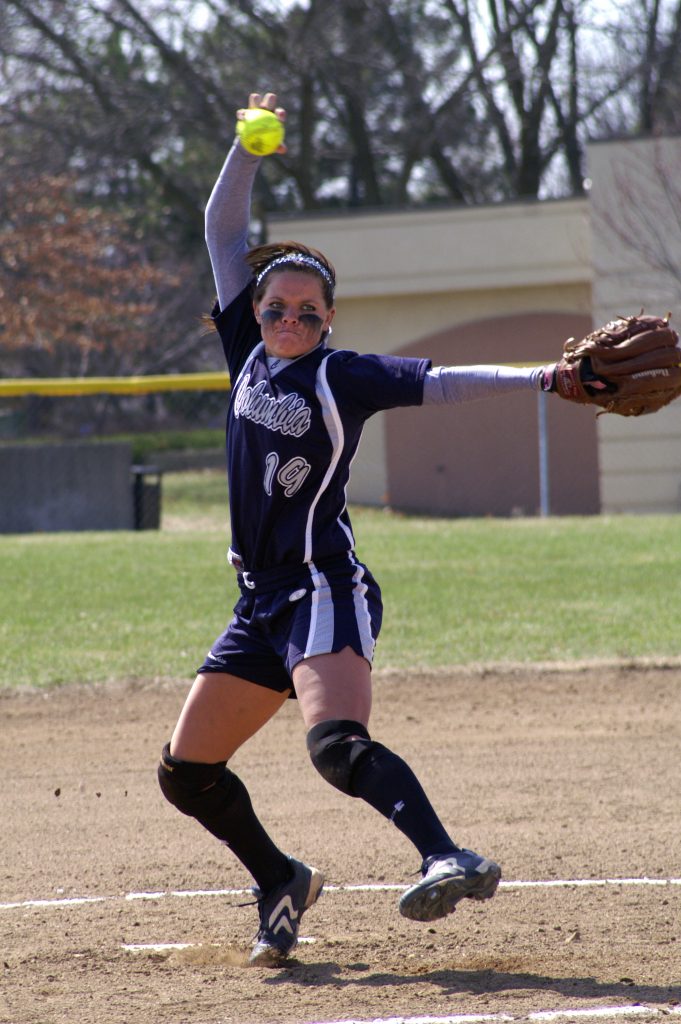 Edina native Katie McMahon received her undergraduate degree in Marketing and International Business from Columbia College on December 20, 2008. McMahon will pursue her Masters Degree at Columbia College and help coach the Cougars softball team in 2009 according to family sources.

The two time NAIA All-American concluded her college softball career in May of 2008 as the most decorated college athlete to graduate from Knox County schools since the 1963 consolidation. McMahon won her final college softball game on the mound. The Cougars beat defending NAIA softball National Champion Oklahoma City University by a 4-2 final score.

The three time all American Midwest Conference selection struck out five batters in seven innings pitched against Oklahoma City. She allowed six hits, walked five batters and went 2-3 at bat with a run scored in her final college contest. McMahon finished the 2008 Columbia College softball season with a 20-5 overall record after being originally recruited as an infielder and pitcher.

Katie McMahon and recent Culver-Stockton College pitching ace Sara Eggleston hooked up in one of the most memorable area high school softball games of all time during the 2003 district tournament. Katie McMahon graduated from Knox County HS as their career strikeout leader with well over 250 strikeouts in a single season.
Knox County edged Scotland County by a 4-3 final score during a 17 inning district semi-final thriller. Eventual state champion Putnam County edged the Lady Eagles by a 1-0 final score in the 2003 district title game.

Marcie and Katie McMahon earned all district and all region high school softball honors. Katie McMahon was named to the Missouri Sportswriters and Sportscasters Association Class 2 All-State softball team in 2003.

The Magic were conference softball champions from 1993 thru 2005. Marcie McMahon was a three year starting outfielder at Columbia College closing with the 2007 season. Marcie graduated from Columbia College with a degree in Health and Human Services.
Marcie McMahon was an assistant coach on the 2008 Knox County-Brashear middle school softball coop. She is currently pursuing a degree in education

Shortstop Katie McMahon was moved to the Columbia College circle during the 2006 season. McMahon was 16-8 overall in 2006 after taking over from Sullivan, Missouri HS all stater Meaghan Bailey. Katie struck out 106 batters in 144 innings pitched in 25 games with a 1.43 ERA.

After earning the Cougars’ top mound slot, Katie McMahon went on to win the American Midwest Softball Pitcher of the Year Award in 2007 and 2008. Her 17-12 record and 1.39 earned run average helped net the 2007 Columbia Women’s Intersport Network Athlete of the Year Award along with the Cougar’s MVP Award.

Katie McMahon fanned 162 batters in 181 innings pitched during the 2007 campaign. She compiled a 1.68 ERA in 27 games her senior season. Katie McMahon struck out 170 batters in 179 innings pitched for Columbia College. The right hander hurled 24 complete games, helping lead the Cougars to a 42-12 overall record in 2008.
“I will remember the bonds I formed with my teammates,” said Katie McMahon when asked to reflect on her high school and college softball career. “I wouldn’t have gotten anywhere without them. My last game as a pitcher was against the defending National Champions. I knew it would probably be my last game. I wanted to end it giving my best.”

“Getting to play with Marcie (McMahon) all those years was nice,” said Katie McMahon. “I played third base my freshman year (at Columbia College) I just worked hard, got up there and stayed there,” said McMahon of her road to the top pitching slot at Columbia.

Katie McMahon was an Honorable Mention NAIA softball All-American in 2007 and 2008. Bevier, Missouri HS graduate Valerie Teter shared CC pitching duties with Katie McMahon in 2008. Teter wound up fourth in NAIA Division I in terms of innings pitched per game, 18th in the nation in pitching ERA along with hitting eight homers and 47 RBI”S.

Freshman Val Teter was the 2008 AMC Player of the Year. Teter was a 2008 NAIA All-American. Current Columbia College softball players from Northeast Missouri include Jodie Schultz and Stephanie Schultz from Highland HS, Rachel Brawner and Ashley Brawner from Kirksville HS and Kenzie Cavanah from Marceline HS.
“It didn’t really hit me when I was playing, but it was really an honor to be the number one pitcher at Columbia College,” said McMahon. “I owe it all to my teammates and my coaches. They made the plays and scored the runs behind me. Without them, I would not have won so many games.”

The former KCHS standout etched a college career pitching record of 53 wins and 25 defeats over a three year span from 2006 to 2008. “The Knox County community is great. They are very supportive. My parents are great. They took me everywhere. I want to be around the game. I want to give my knowledge of the game to other people.”
Katie and Marcie McMahon’s parents are Denny and Kathy McMahon of Edina. Their brothers are athletes in their own right. Eagle junior Lance McMahon currently plays basketball and baseball along with keeping the Lady Eagle softball statistics.