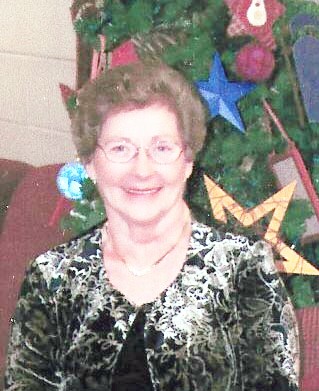 Ernestine Lucille Hamlin, age 70, of Edina, Missouri, died Saturday, December 27, 2008, at the Knox County Nursing Home in Edina, Missouri.
She was born August 26, 1938, in rural Knox county, Missouri, the daughter of Ernest G. and Edna Lucille Mitchell Hall.
On December 8, 1956, at Edina, Missouri she was united in marriage to Frankie M. Hamlin.
Surviving are her husband Frank Hamlin of Edina, Missouri, two children, Timothy Wayne Hamlin and wife LeaAnn of Edina, Missouri, Deborah Sue Peters and husband Steve of Edina, Missouri, five grandchildren, Shelly Lynn Peters and her fiancée Jesse Gray, Lorrie Anne Peters, Joshua Wayne Hamlin, Meredith Katelyn Hamlin and Nicholas Lee Hamlin, her aunt and uncle F.B. and Clara Hall of Edina, Missouri, numerous nieces, nephews, brothers-in-law, sisters-in-law and cousins.
Ernestine was preceded in death by her parents.
Ernestine attended Bishop rural school and graduated from Novelty High School with the Class of 1955. She attended Northeast Missouri State University for a short time and went to work at Kirksville Osteopathic Hospital in secretarial pool from February 1956 to June 1956. She worked at ASC office in Knox County from June 1956 until June 1959, then the Edina Sale Barn from May 1964 until May 1977 at which time she went to work at Hawkins Insurance Group, where she was presently employed as accountant and bookkeeper. She was also bookkeeper for her husband at Hamlin 66 and Hamlin MFA Service Stations in Edina for many years.
She was the best wife, mother, grandmother and friend anyone could have. She enjoyed car racing, gardening and mowing. Ernestine was a Knox County Eagles fan and enjoyed watching her grandchildren play sports. She was a member of the Edina Assembly of God Church and had taught Sunday School for over thirty years.
Funeral services were held 2 p.m. Tuesday, December 30, 2008, at the Assembly of God Church in Edina, Missouri. Reverend Ray Peters and Reverend Robert Stephens officiated the services. Burial was in the Linville Cemetery.
Visitation was Monday, December 29, 2008, after 4 p.m. with the family receiving friends from 6 p.m. to 8 p.m. at the Hudson-Rimer Funeral Home in Edina, Missouri.
Expressions of sympathy in memory of Ernestine Hamlin may be made to the Edina Assembly of God Church Sunday School Department or the American Cancer Society. Memorials may be left at or mailed to Hudson-Rimer Funeral Home, P.O. Box 1, Edina, Missouri, 63537.
Email condolences may be left on our website at www.hudsonrimerfh.com