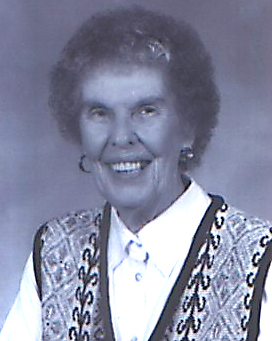 She was born September 13, 1919, in Bladensburg, IA, a daughter of John and Laura Irwin Carman.

She was preceded in death by her husband; two sons, Craig and Steve Bailey; a granddaughter, Kimberly Foust; and two brothers, Max and Charlie Jo Carman.
Helen graduated from high school in 1937 in Agency, IA. She owned and operated Bailey’s Discount Store north of Kahoka for 20 years and for 25 years was employed by Shellor Globe, retiring at the age of 70.

She was a member of the Kahoka United Methodist Church, a former member of the Kahoka Presbyterian Church and elder for 30 years. She was also a member of the D.A.R. and D.U.V. She was a former Cub Scout and Brownie Leader when her children were small. Following her retirement, she was a volunteer at the Clark Co. Senior Center and enjoyed the fellowship there. She spent a great deal of her retirement in her second home in Hollister, MO, where she volunteered at The Pink Door which benefitted Skaggs Hospital in Branson. She enjoyed playing cards and games and spending time with friends and family.

Burial was at 2:30 in Shaul Cemetery, Ottumwa, IA with Pastors Richard Schlotter and George Edgerly officiating.

Visitation was held after 9 a.m. Wednesday with family receiving friends from 10 a.m. until time of services.

Memorials in lieu of flowers were suggested to the Clark Co. Senior Center.
On-line condolences may be expressed at www.timeformemory.com/wilsonfh.