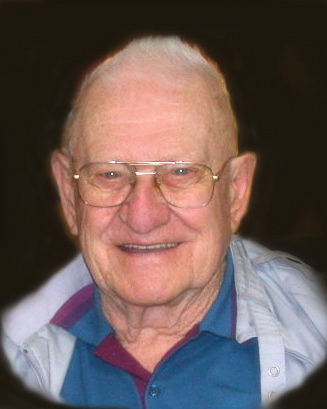 William Edward Ellison, 89, of Kahoka, MO, was called to the Lord on Wednesday, December 31, 2008 in Eureka Springs, Arkansas at his daughter’s home where he spent his remaining days.

Bill proudly served in the United States Army during WWII. His service was honored as he was a part of combat operation in the Pacific Offensive. Bill began his career with Alcoa’s Davenport, Iowa plant in 1948. He was promoted to supervisor and transferred to Newburgh, Indiana in 1965 when Alcoa’s Warrick operations began production. Bill retired from Alcoa in 1981 completing a successful career of 33 years.

While living in Newburgh he was a member of the St. John’s Catholic Church and the Knights of Columbus. In 1990, he moved to Kahoka, Missouri where he was a member of St. Michaels Catholic Church.
He enjoyed traveling, camping and the great outdoors. He loved visiting and spending time with his family and friends. He had a special place in his heart for his grandchildren and great grandchildren.

He was preceded in death by his parents, and four sisters, Rosetta Cramer, Isabel Cox, Ethel Trinity and Marie Kirchner.
Mass of Christian burial will be held 2:00 p.m. Saturday at the Shrine of St. Patrick in St. Patrick, Missouri with Father Paul Hartley officiating. Burial will be in the St. Patrick Cemetery.

Visitation will be held after 2 p.m., Friday at the Vigen Memorial Home in Kahoka, MO with the family meeting with friends from 6 – 8 p.m. Reciting of the rosary will be at 5:30 p.m. at the funeral home.

Memorials may be made to the Alzheimer’s Association, Hospice or the Shrine of St. Patrick.