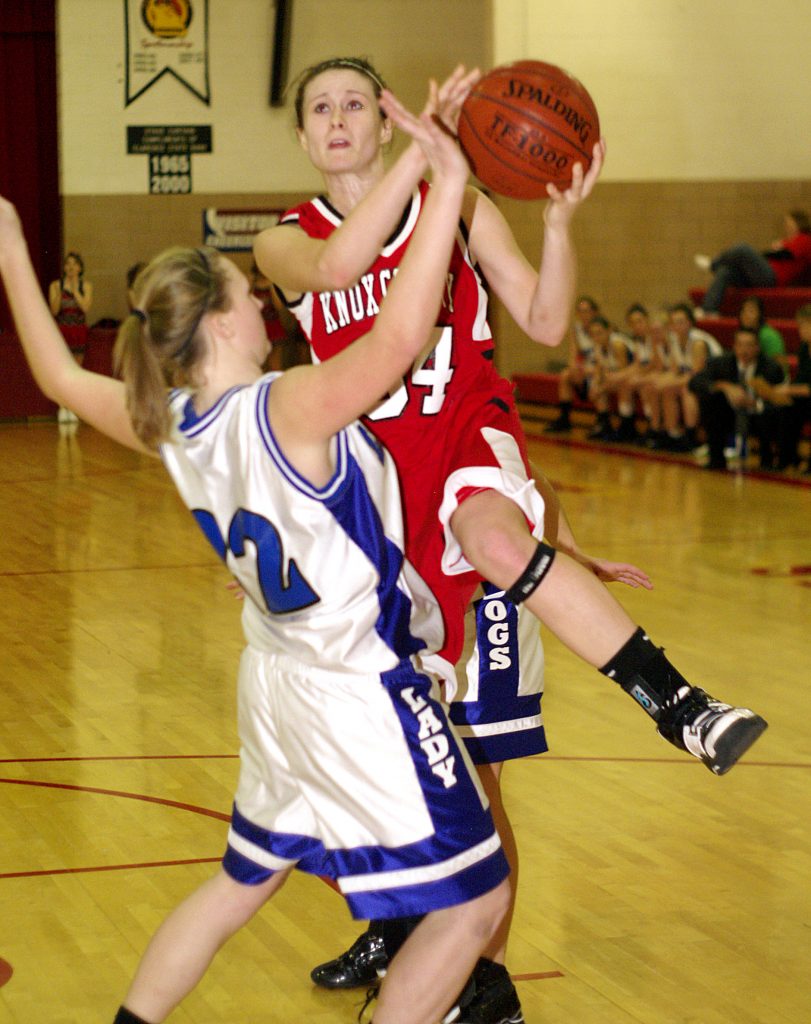 Third quarter full court pressure and good stretch play helped Brookfield (4-6) to a 23-12 third quarter edge and a 55-50 win in the girls’ consolation championship game of the South Shelby Tournament. The Lady Eagles cracked off a 15-3 second quarter run to a 24-21 halftime lead.

Brookfield jumped out to an 8-2 lead. The Lady Bulldogs rebounded and moved the ball extremely well early in the contest. Brookfield led 13-7 at the first break and forged an 18-7 lead with 6:26 to play in the second quarter.

Knox County (3-6) forced turnovers and clawed back into the contest. Lorrie Peters lit the fuse for the 15-3 Lady Eagle rally with a pair of free throws. Tessa Ramer tossed in two home run balls, along with a couple of buckets and two free throws.
Tessa Ramer stole the ball and scored with 15 seconds to play in the first half for a 24-21 KCHS lead. Knox County had three offensive rebounds in the final 90 seconds of the half. The Lady Bulldogs turned the ball over and appeared on the ropes during the last three minutes of period two.

Brookfield began their full court pressure defense. The Lady Bulldogs tied the score at 31 and took a field goal lead when Brooke Harrington scored at the four minute mark of period three.

Brookfield missed several inside shots or the margin could have been greater. Tessa Ramer tied the contest at 34 with a three pointer at the 2:06 mark of the third quarter.

“They seem to wear out a little, or have trouble with pressure in the second half,” said Brookfield coach Mike Severa of the Lady Eagle scouting report. “We are not very experienced. They have some very good players. I thought we would have a good chance if we could stay close.”

Brookfield scored the final six points of the third quarter and led 44-36 at the last break. Knox County fought back within four points. Lorrie Peters sank a free throw pulling the Lady Eagles to a 52-48 deficit at the 1:43 mark of the fourth quarter.
Stacey Leckbee stole the basketball and sank a pair of free throws for a 53-50 Brookfield lead with 40 seconds to play in the game. The Lady Eagles had two chances to tie the game but could not get the ball in the hole. Freshman guard Alyssa Elson iced the game with two Brookfield free throws with 30 seconds showing on the clock.

”You can’t play a quarter and a half strong and give the other two and a half quarters to the other team,” said KCHS coach John Weaver. The Lady Eagles lost their fifth consecutive contest.

“Lorrie Peters fought hard on the boards. I know they had to out rebound us on both ends. We have to do a better job of rebounding and taking care of the ball if we want to win these close games,” said John Weaver.