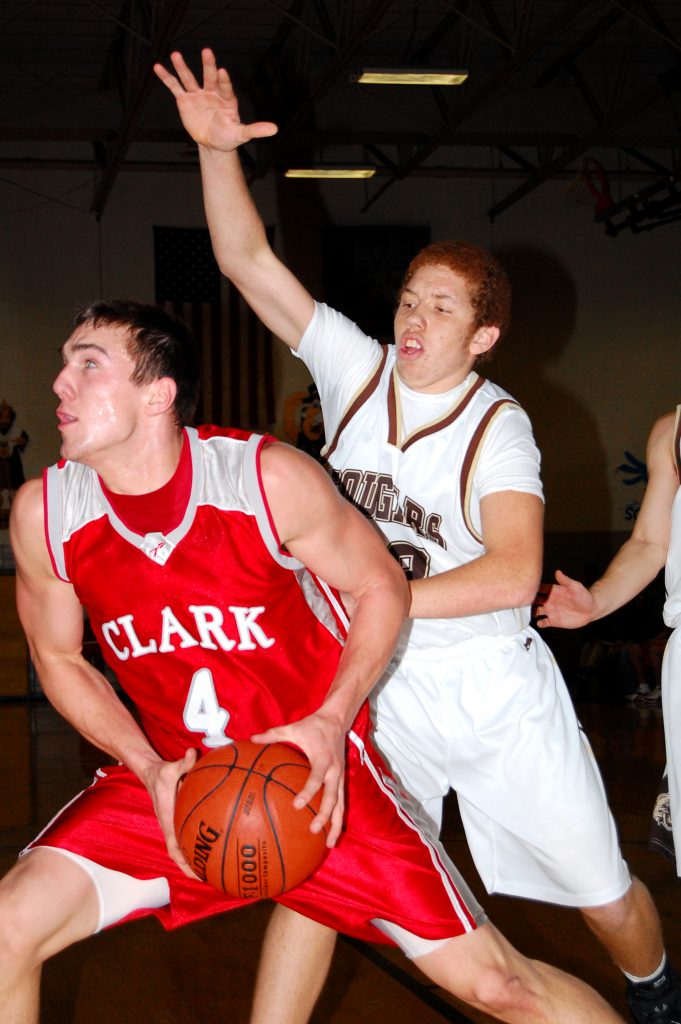 Clark County basketball teams fared well at the Highland Tournament last week, with both the boys and girls winning the Consolation titles on Friday night. After winning their openers early in the week, both Clark County teams fell to Canton in their second round matchup on Wednesday night.

The Lady Indians fell to the state-ranked Canton Lady Tigers 71-43. Clark County trailed 14-10 after one quarter, and 32-25 at the half. Canton dominated the second half of the game, scoring 39 points compared to the Lady Indian’s 18.

Unofficially, Megan Brennan led the Lady Indians with 14 points. Cady Flood put in nine points, followed by Brooke Wheeler with six. Rachel Daw and Leighann Moulder each had four, and Britni Bertelli and Kayla Buschling each had two.

The Indians boys held on to the Tigers tail, but couldn’t quite come up with the win. The Indians missed many shots in the first half, and couldn’t buy a rebound, but the Indians managed to take a 15-14 lead with 2:38 left in the half. Canton then went on an 11-0 run to close out the half, leading 25-15 at the break.

The Indians came alive in the second half again, cutting the Tiger lead to only one point in the fourth quarter, but it was too little, too late for Clark County as Canton held on for a 59-50 win.

Michael Brennan led the Indians with 19, followed by Bryan Plenge with 11. Javis Vineyard had eight, and Justin Alderton nailed a pair of threes for six points Ethan Allen, Justin Oilar and Dakota Armstrong each had two.

The Lady Indians took on a tenacious Scotland County in the Consolation game on Friday night. Clark County jumped out to an early 8-1 lead, and led 12-6 after the first. But the Lady Tiger battled back to a 18-17 halftime score.

The Lady Indians pulled away early in the third, but the momentum swung back to Scotland County as they tied the game at 28 after three quarters.

Clark County allowed only four Tiger points in the final period, and went on to win 40-32. Cady Flood led the Lady Indians with 11, and Brooke Wheeler had 10. Britni Bertelli added 9, Megan Brenna had six and Chelsea Edmondson had four.

The boys’ Consolation game had Clark County taking on the explosive host Highland Cougars, and Highland showed they could score early, running out to a 10-2 lead. The Indian fought back, and trailed 12-8 after one period. The back and fourth continued through the second period, and at the half, Clark County trailed 25-24.

The Indian defense stepped up in the second half, preventing Highland from scoring for nearly six long minutes in the third and fourth quarters.

By the fourth quarter, the frustrated Cougars were in trouble, and the Indians rolled to a 56-42 win, led by Michael Brennan with an impressive 29 point performance. Byran Plenge added 13. Ethan Allen had seven, Dakota Armstrong had three and Justin Oilar and Justin Alderton each added two.