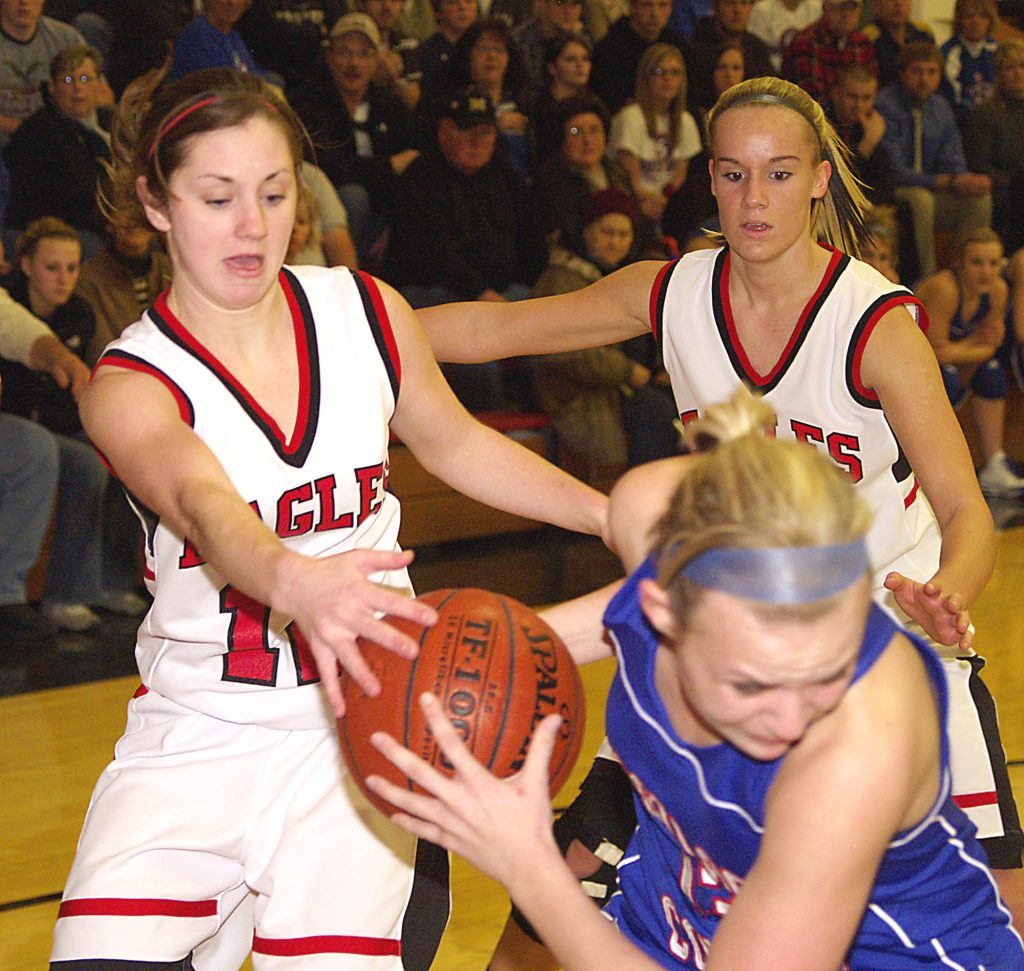 The Knox County Eagle gym has seen many thrilling moments in 45 years plus. Katie Ausmus stole the ball in the closing seconds, of the January 16 Knox County Courtwarming contest.
The play set up Lorrie Peters bringing the capacity crowd to their feet with a game tying basket and steal in the final ten seconds for a 32-30 win.

The set electrified the throng, and certainly chilled the visiting Scotland County faithful like the harsh wind outside the building.
Tessa Ramer took the ball to the hole and drew a foul with 2.5 seconds to play in the game. Ramer sank both free throws capping the nine second four point rally.

Knox County was a chilly 10-40 from the field, and sank two of eight from three point range. Scotland County attacked the middle of the lane well and went 13-35 from the field for 37%.

This game boiled down to Knox County rebounding, free throw shooting and play making ability. Scotland County grabbed a quick 6-2 lead. Katie Ausmus stole the ball and fed Stacey Leckbee for a game tying hoop at the 3:29 mark of the first quarter.

Scotland County scored the next four points for a 10-6 edge. Knox County made a good recovery from a poor start when Stacey Leckbee canned a three ball.

Katie Ausmus took advantage of a Lady Tiger mistake. Ausmus tossed in two of three free throws after being fouled over 30 feet from the goal with 2.7 seconds to play in the first quarter.

The five point KCHS run in the last 36 seconds of the first quarter pulled Knox County up 11-10 at the first break. The Lady Tigers (8-5, 0-1) converted second quarter offensive boards and KCHS turnovers into a 6-3 spurt to a 16-14 halftime lead.

Knox County made plays early in the third quarter. Lorrie Peters and Tessa Ramer forced Scotland County turnovers, resulting in a 5-2 run to a 21-18 Lady Eagle lead with 2:28 remaining in the third quarter.
Stacey Leckbee swished a three ball and Amanda Woods earned two more precious points with an inside shot.

The score remained at 23-20 Knox County at the final break. Scotland County took the ball inside and gathered a 26-23 lead with 4:55 remaining in regulation time.

Lorrie Peters drove the length of the court and scored with 1:56 to play in the game, pulling the home team within a 28-27 deficit. Knox County had three shots and the basket on their next possession.
Tessa Ramer tied the game with a free throw at the 1:33 juncture of period four. Kelsey Frazier sank a Scotland County free throw for a one point edge with 57 ticks on the game clock.

Deidra Dochterman grabbed a clutch offensive rebound when the second attempt bounced off the rim.

Kelsey Frazier tossed in the first of two free throw chances 20 seconds later for a 30-28 Scotland County lead. Lorrie Peters got the carom. The Lady Eagles missed a good shot. Katie Ausmus took the ball away in the last seconds.

Junior Lorrie Peters put the ball in the hole with 9.2 seconds remaining in regulation time tying the game at 30. Peters stole the inbound pass for Knox County. Tessa Ramer took the ball to the rack from the left wing.

The KCHS all conference senior was fouled on the block. Tessa Ramer sank 80% of her free throws last season. Ramer drilled both free throw attempts for a 32-30 Knox County lead.

“It was just so intense,” said Tessa Ramer of the final 30 seconds.

“My adrenaline was pumping so hard. We were all jumping for joy in the locker room after the game. We are a team that doesn’t show a lot of emotion. There was a lot of screaming, yelling and hugging.”
A last second Scotland County heave fell short at the buzzer. Knox County fans had their turn to celebrate their thrilling 32-30 conference win. The Lady Eagles held a 37-29 total rebounding edge at the close of play. Knox County grabbed 16 offensive rebounds to nine for Scotland County.

“If we make our free throws down the stretch, it’s a two possession game,” said Scotland County coach Jaryt Hunziker. “We have won a couple of games at the end of the game on the line. This is a rollercoaster, high and low.”

Scotland County had ninth ranked South Shelby on the ropes earlier in the week and lost a close game in the final seconds. “That just goes to tell you that a game’s not over until the final buzzer. It comes down to executing at the end.”

“They were taking the shots we wanted them to take and they weren’t hitting them. The problem was that we weren’t either,” said Lady Eagle coach John Weaver.

“You just continue to grind it out on the defensive end in a close game like that and the offense will come,” said Weaver. “We got a steal and Lorrie (Peters) made that huge lay up. Scotland County gets after it on defense just like we do.”

“We got second chance points off the boards. The last time we went over there (to Scotland County) they made their free throws and we didn’t. Tonight it was exactly the opposite. We tried to foul the right people at the end of the game, and luckily they missed.”

“Lorrie (Peters), Katie (Ausmus) and Tessa (Ramer) made big plays at the end. That was the most positive emotion we have shown this year,” said Coach Weaver.

“We have had tough losses. We don’t want to feel that way again. This win was huge for our program. I’m so proud of and happy for our kids.”