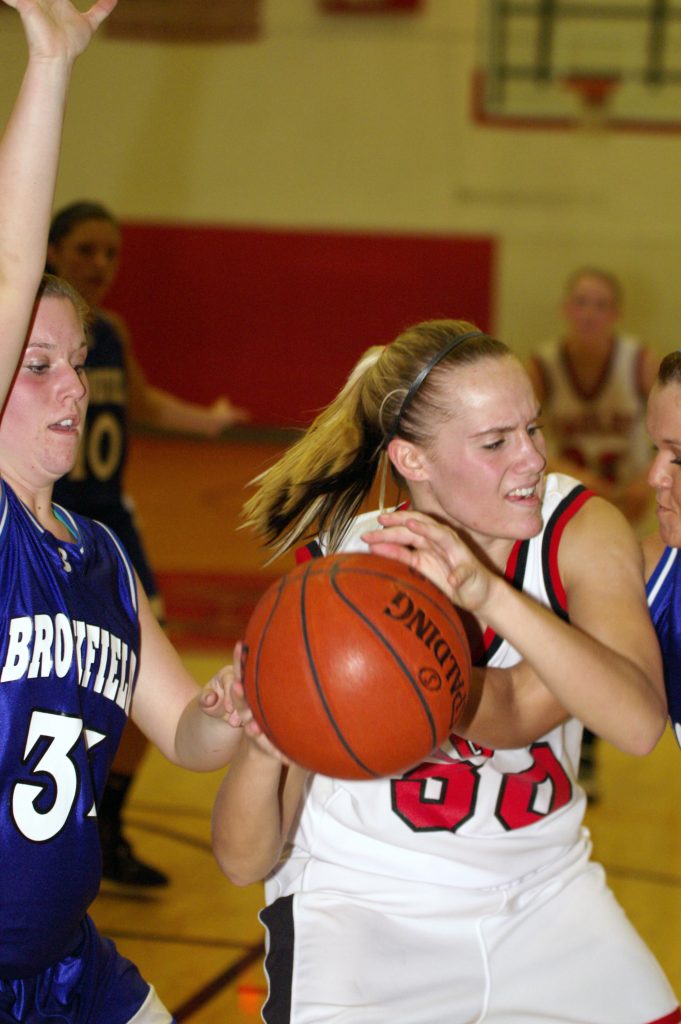 The Lady Bulldogs pierced Knox County’s defense for several easy first half buckets. Brookfield scored the first five points. Tessa Ramer answered a pair of Quinsie Gall three balls with a like number of KCHS home runs in the first half. Tessa Ramer tied the game at 18 with 2:07 showing on the first half clock with a three pointer.

Knox County made defensive adjustments to slow Brookfield slashes to their goal. The Lady Bulldogs were unable to sink perimeter shots. Tessa Ramer drove to the rim for a 32-26 KCHS lead with 2:50 to play in the third quarter.

Brookfield sank the last bucket of period three and trailed 34-28 after being outscored 14-8 in the third quarter. “We shot 7-31 in the second half,” said Brookfield coach Mike Severa. “There was an eight point difference from the free throw line.”

Knox County sank ten of 19 from the free throw line. The Lady Eagles left the door ajar for a Brookfield rally with a 4-11 fourth quarter charity stripe chill. Knox County was able to play defense without putting Brookfield (2-6) on the foul line.

“We only lost by eight. Most teams would get blown out when they (shoot 16-59 from the field,)” said Coach Severa. “Knox County is a good team with good players. They were a little more physical tonight.”

The teams had identical totals of 14 field goals and two made three pointers. Knox County opened a 41-34 lead with Katie Ausmus fed Amanda Woods for a Lady Eagle field goal at the three minute mark of the fourth quarter.

Knox County executed their delay game in the last two minutes. The Lady Eagles missed five of six free throws at one juncture. Brookfield turned the basketball over and missed scoring opportunities at the other end.

“We rebounded better. They got a lot more offensive boards in the first half,” said KCHS junior Lorrie Peters. “Having a home game in the conference pumped everybody up more. We had to step up our defense in the second half.”

“The difference was our defense,” said Knox County coach John Weaver. “Tonight it was there, and the last time it wasn’t. We were able to get three people with around ten points or above. I thought Amanda Woods played really well despite her knee.”

“Our free throw percentage was horrible,” said Weaver. “Stacey Leckbee was sick. I’m really proud of the girls to get an eight point win at home. We wanted them to take shots from 15 feet and out. You get upset with defensive rebounding, but that means they missed shots. We got second chance baskets in the second half. Once again, our defense won it for us.”